Yoga Across the Seas, on Siachen Glacier as Armed Forces Prepare for International Yoga Day 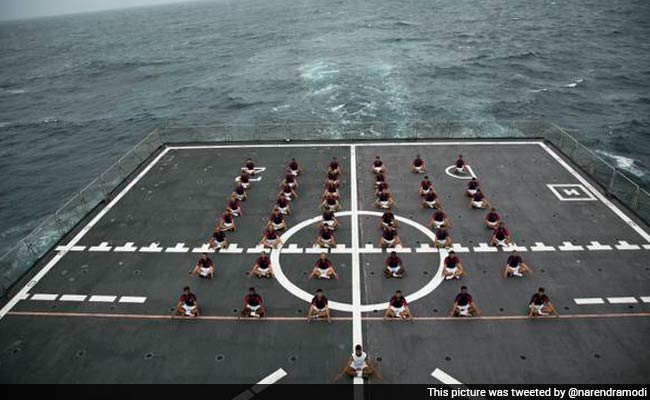 The Navy has plans for Yoga Day and aims to do "Yoga across the oceans".

New Delhi: Not to be left behind, the armed forces have planned yoga sessions on board warships and even at Siachen, the world's highest battlefield, to celebrate the first International Yoga Day on June 21.

"From Kashmir to Kanyakumari," a senior Army official said when asked if the force was planning events for Yoga Day.

The Navy too has plans for Yoga Day and aims to do "Yoga across the oceans".

"Yoga sessions would be carried out on all our ships and installations. It is an international day. Like we observe World Environment Day, we will also celebrate the International Yoga Day," an official said.

Indian Navy units located as far as the Mediterranean Sea in the West, the Western Pacific Ocean and the Southern Indian Ocean will participate in the event.

India will lead 191 nations to mark the IYD on June 21, highlighted by a mega event here on Rajpath where armed forces, NCC cadets and government officials are scheduled to perform 'asanas'. Around 35,000 persons are expected to take part in the event.

The UN General Assembly had in December last year adopted an India-led resolution, supported by over 175 UN member states, declaring June 21 as 'International Day of Yoga', recognising that "Yoga provides a holistic approach to health and well-being".

The day will be observed in over 251 cities in 191 countries across the world and the Indian missions and diplomatic posts have made arrangements for the celebrations.

The Navy in a statement said it was motivated by the words of Prime Minister Narendra Modi that "Yoga is an invaluable gift of ancient Indian tradition. It embodies unity of mind and body, thought and action, restraint and fulfilment, harmony between man and nature, and a holistic approach to health and well being".

The Navy said it is preparing to observe the first International Day of Yoga by launching multiple initiatives to introduce the practice of Yoga to its community and enable naval personnel accrue maximum benefit from it.

"The Navy's multi-pronged action plan to observe the event is aimed at encouraging naval personnel to translate the practice of Yoga into a way of life, with the overall intent of enabling them and their families achieve harmony among mind, body, emotion and energy and lead healthy and happy lives," the statement said.

Accordingly, Indian Navy units located as far as the Mediterranean Sea on the West, the Western Pacific Ocean and the Southern Indian Ocean will participate in observing the occasion and with a unique design.

Widely dispersed ships of the Navy will conduct Yoga sessions that commence at the pre-decided local time of 7:00 AM, the exact time at which the occasion will be observed at Rajpath, such that "as the sun moves across time zones in its passage from the Pacific Ocean to the Mediterranean Sea, it will find personnel of the Indian Navy greeting it successively with their asanas across a vast geographical swath".

Navy's action plan also includes activities that will be pursued in a sustained manner over the long term.

"Efforts are also in place to include Yoga modules in the curriculum of training institutions and establish Yoga Centres at Naval stations across the country," the Navy said.