An aggregate of nine exit polls indicates that the BJP will win 110 seats and the Congress 109 in Madhya Pradesh. 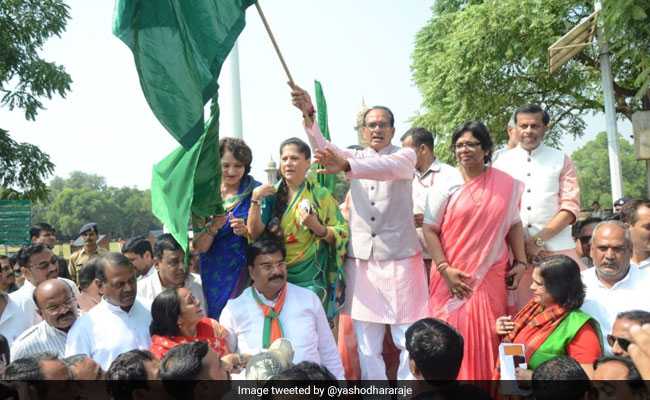 It would be "remarkable" if BJP formed government in the state for a fourth time, Yashodhara Raje said.

The BJP's Yashodhara Raje said she was "very hopeful" about a BJP victory in Madhya Pradesh as the leads see-sawed between the party and challenger Congress. Chief Minister Shivraj Singh Chouhan, she said, was very confident of winning and it would be "remarkable" if the BJP formed government in the state for a fourth time.

The battle in Madhya Pradesh has been a cliffhanger since morning. While initially the Congress established a lead, the BJP surged around mod-morning. The leads have been yo-yoing between the two parties since.

In the 230-member house, the majority mark is at 116. Neither party has been able to touch that mark so far. Mayawati's Bahujan Samaj party, which might play a key role in the event of a split verdict, is leading in eight seats.

An aggregate of nine exit polls indicates that the BJP will win 110 seats and the Congress 109. The half-way mark in the state is 116. It had also given two seats to Mayawati, who refused to tie-up with the Congress after months of seat-sharing talks.

"it is too early to say that Madhya Pradesh is lost," Ms Scindia said. The race was going to be close after loan waiver announcements by the Congress. The announcements seemed to have gained traction," she added.

Shivraj Singh Chouhan, who has ruled the state for three consecutive terms, has sought a fourth mandate, leading the party's campaign in the state. Despite Congress claims of high anti-incumbency, he has insisted that it would be a pro-incumbency vote.

The Congress has said that it would be a "make or break" election for the party.