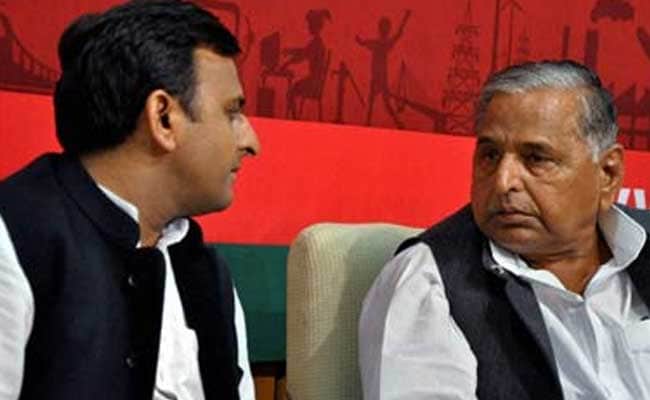 The meeting has been called at the chief minister's official 5, Kalidas Marg residence, a day before SP chief Mulayam Singh Yadav meets the party legislators at the state headquarters on Vikramaditya Marg.

Sources said the meeting is to be watched for as the meeting could witness Akhilesh spelling out his future course of action in the turf war which has erupted between him and his father Mulayam Singh Yadav and uncle Shivpal Singh Yadav.

Akhilesh Yadav skipped a meeting of district SP chiefs convened in the state capital on Friday and Saturday and chose to meet them at the chief minister's residence separately.

Party veterans met Mulayam Singh Yadav on Saturday to find some solution in what is now becoming an unending feud in the party's top leadership.

But insiders said they failed to pacify Mulayam Singh Yadav who is "extremely hurt" at the rebellion of his son Akhilesh and "crude protests" by his supporters.

Leaders who met Mulayam on Saturday - Beni Prasad Verma, Reoti Raman Singh and Naresh Agarwal, later told mediapersons that any disrespect shown towards Mulayam will not be tolerated at any cost.

Hours later, Udayveer Singh, an legislator considered very close to Akhilesh Yadav was shown the door and expelled from the party for six years.

Singh had written a terse letter to the SP chief asking him to step down as SP's national president and make way for his son.

This further aggravated the situation as most leaders close to Akhilesh have been thrown out of the party now.

In the evening, Shivpal also filled up the vacancies of presidents in party's frontal wings and filled it with men known to be his followers.

Promoted
Listen to the latest songs, only on JioSaavn.com
Sources say chances of any peace were become remote with every passing moment.

For now, all eyes are on 5, Kalidas Marg on the proposed meeting of legislators convened by the chief minister, who seems to be in no mood to backtrack from his stated position.