"Would Priyanka Gandhi Drink It Before?" Nitin Gadkari On Ganga Clean-Up

Lok Sabha Elections 2019: "If I had not made the Allahabad-Varanasi waterway, how could she (Priyanaka Gandhi Vadra) have travelled?" Nitin Gadkari said. 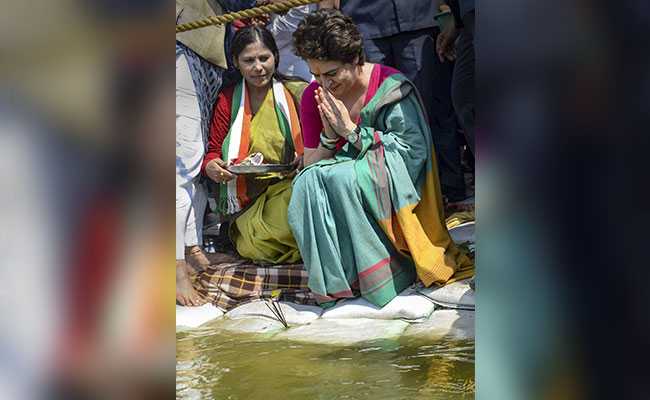 Nitin Gadkari said he doesn't think Priyanka Gandhi would make any impact in UP politics.

Asked about the impact of Ms Vadra in Uttar Pradesh politics, Mr Gadkari said: "I don't think that she would make any impact."

"If I had not made the Allahabad-Varanasi waterway, how could she (Priyanaka Gandhi Vadra) have travelled? She also drank Ganga water. Could she have done the same under the UPA government? By March 2020, river Ganga will be 100 per cent per cent clean," Mr Gadkari told news agency ANI.

The minister said the BJP was a cadre-based party which opposed dynasty and caste politics.

Priyanka Gandhi began her boat campaign from Prayagraj and ended it in Varanasi, Prime Minister Narendra Modi's parliamentary constituency. During her journey that covered 100 km, she interacted with people who live by the river. She also hit out at the BJP and the Yogi Adityanath government.

Priyanka Gandhi, 47, was tasked with leading the party campaign in the eastern half of Uttar Pradesh in January.

The Congress is banking on Priyanka Gandhi to boost its campaign in Uttar Pradesh after years in the margins of a politically vital state that has given the party some of its most iconic leaders, including prime ministers.

In 2014, the Congress was reduced to just two seats in the 80-seat UP, retaining just the Amethi and Raebareli constituencies of Rahul Gandhi and his mother Sonia Gandhi. For years, Priyanka Gandhi had confined herself to campaigning just in these two seats.

On her boat ride from Prayagraj to Varanasi, he said: "If I had not constructed the waterways, how she could have travelled. I got to know that she drank Ganga water. These two things prove that she has accepted our good work."

"I am confident that the Ganga will be 100 per cent clean by March 2020. We will show the world that our heritage river and symbol of our rich history and culture is restored. We will overcome. We are also working to clean the Yamuna river. Thirteen projects are already going on for cleaning and with these the sewage water going into the Yamuna will be stopped. A change can be seen in the next one year," he said.

The central government approved the 'Namami Gange' program in May 2015 as a comprehensive approach to rejuvenate the Ganga and all its tributaries under one umbrella by consolidating existing ongoing efforts.