Would Prefer India "Move Away" From Non-Aligned View, Russia: Top US Diplomat

"We, obviously, would prefer that India move away from their long-term history of non-alignment G77 partnership with Russia," Ms Sherman said in response to a question from Congressman Tim Burchett. 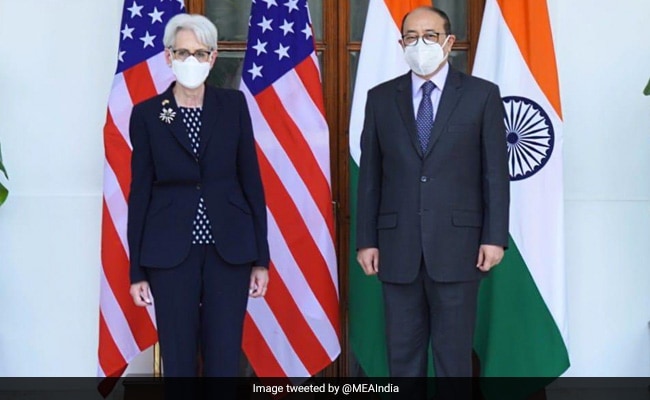 The US would prefer India to "move away" from its long-term history of non-alignment G77 partnership with Russia, the Biden administration has told lawmakers, observing that there is a great opportunity to ramp up defence trade between the two countries that are moving forward on many achievements critical to the prosperity and security of the Indo-Pacific region.

US Deputy Secretary of State Wendy Sherman told members of the powerful House Foreign Affairs Committee during a Congressional hearing early this week that America shares a very critical relationship with India.

"They are the largest democracy in the world. We have a strong defence relationship with them. They are part of the Quad, with Australia and Japan, and we are moving forward on many achievements that are critical to Indo-Pacific prosperity and security," she said.

"We, obviously, would prefer that India move away from their long-term history of non-alignment G77 partnership with Russia," Ms Sherman said in response to a question from Congressman Tim Burchett.

The US has told Indian officials that it will be very hard for them now to get spare parts or to get them replaced from Russia because of the sanctions, she said.

"They have increased their defence relationship with us, and defence sales, and co-production efforts. And I think this is a great opportunity for that to surge in the years ahead," she said.

US officials have expressed concern over India's purchase of the S-400 missile systems by Russia.

In October 2018, India signed a USD 5 billion deal with Russia to buy five units of the S-400 Triumf air defence missile systems to ramp up its air defence, despite a warning from the then Trump administration that going ahead with the contract may invite US sanctions.

Congressman Joe Wilson also asked about India's position in Ukraine. He said the world's largest democracy should be standing firm with the other democracies.

"We're in a conflict that has been identified by President Biden as totalitarianism against democracies. And so, either we stand for democracy's rule of law or we'll be facing around the world destabilisation by governments that are the rule of the gun," he said.

"And so, how can we make an effort to replace the oil that India depends on and the military equipment that they depend on from Putin? This is just so illogical for the extraordinary country of India, the wonderful people of India, to be overlooking abstaining. That's incredible. That's such an insult to the people of India," Wilson said.

India has faced flak from US lawmakers, both Republicans and Democrats, for choosing to abstain from UN votes to rebuke Russia's invasion of Ukraine.

Unlike many other leading Western powers, India has not yet criticised Russia for its invasion of Ukraine and it abstained from the votes at the UN platforms in condemning the Russian aggression.

However, External Affairs Minister S Jaishankar has asserted that India is strongly against the Russia-Ukraine conflict as no solution can be arrived at by shedding blood. He told Parliament this week that if New Delhi has chosen a side, it is the side of peace and an immediate end to violence.

During the hearing, Sherman said America's relationship with India, the world's largest democracy, is critical in so many areas.

"We have had very direct conversations with them about how we can address their very legitimate needs for their country," she added.

"I think that there's progress being made to see what we can do to be supportive to them, while, at the same time, urging them to be more forthright regarding what's happening in Ukraine," Ms Sherman said.

"I did note that they made comments, not surprising, about the horrors that have taken place in Bucha. And so, I think we just have to keep working at this relationship and understanding the complexity of it, and helping India to really understand what is in their national security interests," said the top American diplomat.