"World Is Watching": Sardar Patel's Family At Unveiling Of Statue Of Unity

The family said if somebody uses Sardar Patel's name for the betterment of the country, they feel happy about it 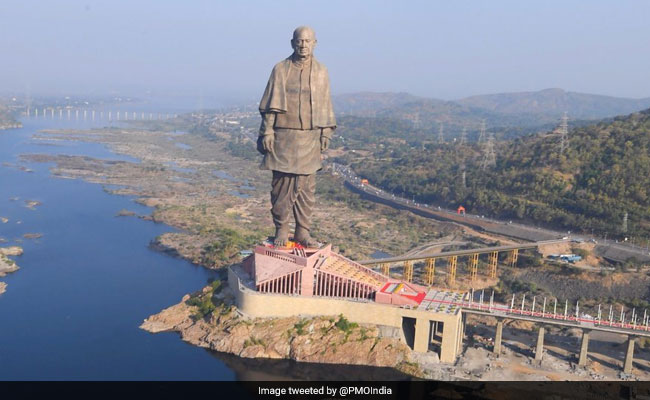 The Sardar Patel statue is twice as tall as the Statue of Liberty.

The grandchildren of Sardar Patel feel very proud today as the "Statue of Unity" was unveiled by Prime Minister Narendra Modi at Gujarat's Kevadiya. Gujarat chief minister called it a tribute by PM Modi to Sardar Patel, the architect of modern India, through the 182-metre-tall statue, the world's largest.

The Sardar Patel statue, twice as tall as the Statue of Liberty, has been built at a cost of Rs 2,989 crore and is located in Gujarat, 3.2 km downstream of the Narmada dam.

Mridula Patel, granddaughter of Vallabhbhai Patel's younger brother, said, "It feels as if Sardar Patel has come back to life. The whole world is watching. We are feeling very proud and happy. PM Modi jihas done a great job. Those who had forgotten Patel will now remember him. The next generation will also know about him. People will be compelled to visit the statue."

The statue has a viewing gallery which can accommodate 200 visitors at a time. This gallery offers a view of the Sardar Sarovar Dam, its reservoir, and the Satpura and Vindhya mountain ranges. Once the statue is open to the public, officials expect around 15,000 visitors each day. The museum has 40,000 documents, 2,000 photographs and a research centre dedicated to Sardar Patel's life.

The family said if somebody uses Sardar Patel's name for the betterment of the country, they feel happy about it.

"Sardar Patel loved his country as much as he loved his family. He gave his life in the service of the nation. He didn't want any position or money. He never had any expectations. He sent my grandfather to study in Bombay when the family had no money. He was a selfless person," added Bhupendra Patel, Mridula's brother.

But he never encouraged his family to come to Delhi as he didn't want them to take advantage of his position, Bhupendra Patel added.

Mridula Patel, however, accused the Congress of not giving Sardar Patel his due.

"What is the Congress doing even now? They feel shy to remember him," she said.

Gujarat Chief Minister Vijay Rupani had earlier alleged that the Congress-led government had propagated the history of just one family and ignored the contributions of other freedom fighters.

He alleged, "They ignored the history of Mahatma Gandhi... Even Sardar Patel's portrait inside the parliament was not installed by them for years. The contribution of freedom fighters like Veer Savarkar, Dr BR Ambedkar was never mentioned."