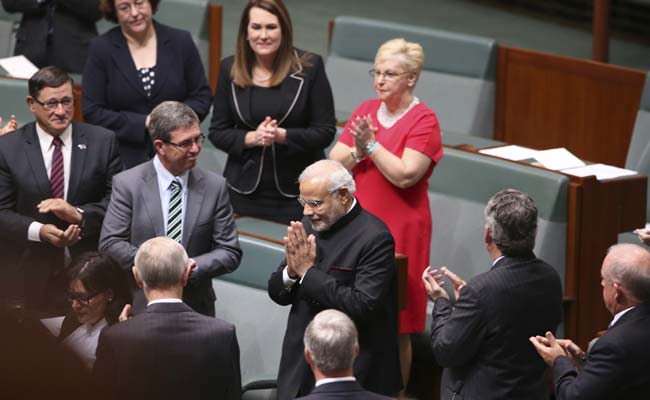 New Delhi: The world is looking at India with renewed respect and immense enthusiasm, Prime Minister Narendra Modi said on Friday, a day after he ended a visit to Myanmar, Australia and Fiji.

Writing in his blog, Mr Modi also said that the G-20 nations had agreed to battle black money because it "has the potential to destabilise world peace and harmony".

Underlining the "historic uniqueness" of his 10-day trip, the Prime Minister said he met a total of 38 world leaders and had 20 bilateral meetings during which he had "frank, comprehensive and fruitful" discussions.

"During these bilateral meetings, I noticed one thing - that the world is looking at India with renewed respect and immense enthusiasm! I see a global community that is tremendously keen to engage with India."

On his first halt in Myanmar, Mr Modi attended the East Asia and the ASEAN summits before getting into bilaterals with Myanmar leaders. He took part in the G-20 Summit in Australia. He then went to Fiji.

Mr Modi said that strengthening trade and commerce and drawing industry to India was a central part of the discussions he had during the visit.

"Numerous leaders I met were very optimistic about our 'Make in India' initiative and are keen to come to India and be a part of the extensive and diverse opportunities India has to offer.

He said India placed the issue of existence and repatriation of black money at the forefront - at the G-20 Summit.

"I am glad the world community took note of this because this is an issue that does not selectively affect one nation. The menace of black money has the potential to destabilise world peace and harmony. Black money also brings with it terrorism, money laundering and narcotics trade," he said.

Mr Modi said India and the ASEAN "can explore new frontiers together". He also said that India can do a lot for the Pacific Island nations and "there is a lot we can learn from them".

Mr Modi said he and his Australian counterpart Tony Abbott made "unprecedented progress in the areas of energy, culture and security and are moving very positively on the issue of nuclear energy".

Promoted
Listen to the latest songs, only on JioSaavn.com
"I am convinced, with even greater consciousness, of the positive difference India can make on the world stage," the Prime Minister added.