"We Should Remember Our Martyrs": Priyanka Gandhi On Independence Day

Priyanka Gandhi Vadra made the remarks while taking part in the Congress' 'Azadi Gaurav Yatra', along with former party chief Rahul Gandhi, and senior leaders Anand Sharma and Ghulam Nabi Azad, among others. 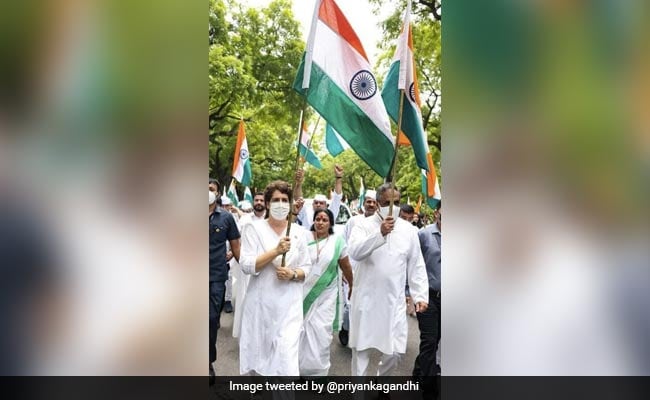 Congress general secretary Priyanka Gandhi Vadra on Monday greeted the people of the country on the 76th Independence Day and urged them to unitedly work to take the country forward.

She made the remarks while taking part in the Congress' 'Azadi Gaurav Yatra', along with former party chief Rahul Gandhi, and senior leaders Anand Sharma and Ghulam Nabi Azad, among others.

"Greetings to the people on India's Independence Day. The message is that we should remember our martyrs, citizens and leaders who sacrificed their lives and fought for independence and because of whom we are independent today. We must resolve that unitedly we shall work to take the country forward," Ms Vadra told reporters.

In a tweet in Hindi, she said on the occasion of Independence Day, the martyrs of the freedom struggle and freedom fighters are remembered.

"We reiterate our resolve to strengthen the message of equality, unity, nation-building and brotherhood emanating from the freedom struggle," she said.

Earlier in a tweet, Ms Vadra said sacrifices, ideas, India's vast ancient culture, values of the Constitution and collective efforts towards development laid a strong foundation for the country.

"Independent India's journey of 75 years is a testimony to this strong foundation. Best wishes on Independence Day," she said.