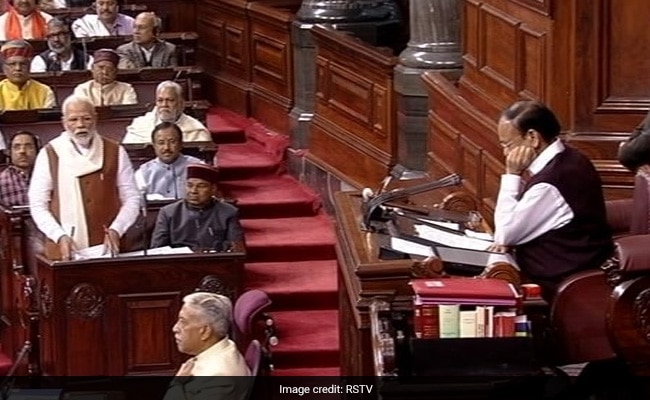 PM Narendra Modi attacked the opposition in the Rajya Sabha on Thursday.

A word has been expunged from Prime Minister Narendra Modi's speech in parliament on Thursday, when he took on the opposition in Rajya Sabha on the National Population Register (NPR).

A word was also removed from comments made by opposition leader Ghulam Nabi Azad of the Congress.

In 2018, some words were dropped from PM Modi's comments on Congress leader BK Hariprasad. He had used wordplay on Mr Hariprasad's initials, which was seen as derogatory.

In 2013, some words were expunged from then prime minister Manmohan Singh's comments in Rajya Sabha during a heated argument with then opposition leader Arun Jaitley. Some parts were removed from Mr Jaitley's remarks as well.

Parliament has a large compilation of unparliamentary words. Every year, new words are added to the list. Recently, words like Pappu, behnoi (brother-in-law), daamad (son-in-law) were also added.

Godse, or Mahatma Gandhi's killer Nathuram Godse, used to be an unparliamentary word. In 2015 then speaker Sumitra Mahajan removed it from the list of unparliamentary words. The term has been used extensively in sparring between the BJP and the opposition over Gandhi. The ruling party has been accused of being soft on members who have glorified Godse, like Lok Sabha MP Pragya Thakur.