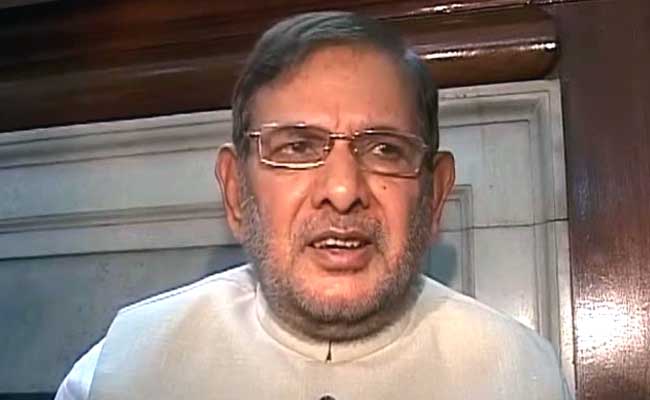 Patna: Hitting out at PM Narendra Modi, JD(U) president Sharad Yadav today described the Prime Minister as "dishonest", and said the secular parties will unite to ensure that BJP is not allowed to "turn the country into mud".

"Modi is one of those dishonest people who have tried to suppress Socio-Economic Caste Census (SECC) figures and break it into various pieces. He promised two crore jobs per year, but see what happened. The condition of the country is bad and we will not allow BJP to turn the country into mud," he said.

The veteran JD(U) leader was speaking at the venue of RJD chief Lalu Prasad's day-long fast to demand the release of caste census figures.

Citing BJP symbol of lotus, Mr Yadav said the flower bloomed only in mud so the saffron party was trying to make the entire country muddy first and then capture it. Warning BJP, the 68-year-old leader said the end-game has just started and the secular parties will unite to finish it off.

Making light of the comments by political experts and rival leaders that Janata Parivar parties unite to disunite again, he said, "Right now there is just an alliance, but just keep watching. All the secular parties will become one after the Bihar elections and then destroy you (BJP). We will give a befitting treatment."

"Humongous scams like 'Vyapam' are happening in the country and we will not spare anybody involved in them. You all accuse us of breaking up or disintegrating. Keep doing so as it doesn't matter to us now. We will unite again, destroy BJP and then disintegrate again," he added.

The JD(U) president also informed that his party will approach the Election Commission to complain about BJP spending Rs 250 crore on 20 lakh saris, which are intended to be distributed in poll-bound Bihar.

"Where is LK Advani who brought up the BJP? Where are senior BJP leaders Murali Manohar Joshi, Jaswant Singh, Yashwant Sinha, Kalyan Singh and others? Who has sidelined them and sent them into oblivion?," Mr Yadav asked pointing fingers at Mr Modi and alleged ill-treatment to veteran leaders of the saffron party at his hands.

Mr Yadav also criticised Mr Modi for his speeches given at Patna and Muzaffarpur during his Bihar visit yesterday and said so many prime ministers have spoken over the years but nobody had given "such a vituperative speech."