'Women meant to do household chores': another shocker from RSS chief 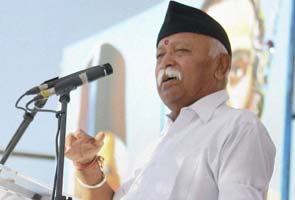 Indore: A day after he sparked a controversy by saying that rapes happen in India not Bharat, right-wing Rashtriya Swayamsevak Sangh's (RSS) chief Mohan Bhagwat has done it again. Now, he says women should restrict themselves to doing household chores, according to what he calls the theory of social contract.

"Theory of contract, theory of social contract, a husband and wife are bound by a contract which says 'you (woman) look after the household chores and satisfy me, I (man) will take care of your needs and will protect you', and until she delivers her duties without fail, he keeps her on the contract and if she fails to honour the contract, he disowns her and if it is the same with the husband who is not honouring the contract, she can also abandon him and go for a new contract then," he said yesterday, while addressing a gathering of RSS workers in Indore, Madhya Pradesh.

Reacting sharply to Mr Bhagwat's comment, CPI(M) leader Brinda Karat said, "I don' think it is really surprising because at the end of the day, this is what RSS is. That is why I think it is the retrograde 'samiti' of India. These were the regents who when BJP was in power wanted a new Constitution of India based on 'manusmriti'. So when he talks in this language, he only reflects his ideology."

The RSS, though, defended Mr Bhagwat's remarks, saying the projection of his views on the marriage system in the Indian context is "totally false".

"In this, the woman has a place of great respect and the man has certain obligations towards the family and the way the whole thing was projected was as though Bhagwat was calling Indian marriage contractual. This is total distortion of what he has said," RSS spokesperson Ram Madhav said.

On Friday, speaking at a gathering of RSS workers in Silchar in Assam, Mr Bhagwat had said that rapes are an urban crime shaped by westernisation, and are not a matter of concern in rural India where traditional values are upheld. "Crimes against women happening in urban India are shameful. It is a dangerous trend. But such crimes won't happen in Bharat or the rural areas of the country. You go to villages and forests of the country and there will be no such incidents of gang-rape or sex crimes," he had said.

"Where Bharat becomes 'India' with the influence of western culture, these type of incidents happen. The actual Indian values and culture should be established at every stratum of society where women are treated as 'mother'," he had added.

The RSS is the ideological mentor of the main opposition party, the BJP. Mr Bhagwat's remarks were shredded by activists and other political parties, but the BJP offered no criticism.

Describing the controversy as "uncalled for", the party's spokesperson had said that Mr Bhagwat "was referring to India's sanskar, tradition and value system where respect for women occupies a pride of place."

Promoted
Listen to the latest songs, only on JioSaavn.com
Mr Bhagwat's comments come at a time when the death of a young medical student, who was gang-raped in Delhi, has impelled introspection on attitudes towards women in a country where a rape is reported nearly every 20 minutes.