Without a flag, Shiva Keshavan honours India at Sochi Olympics 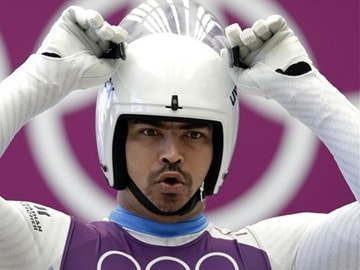 Shiva Keshavan is competing under the Olympics flag.

Krasnaya Polyana: The names adorning just about every available spot on Indian luger Shiva Keshavan's speedsuit are written in faint gray letters, barely visible to those even nearby.

They are not insignificant. For the Sochi Olympics, those names are essentially Keshavan's flag.

India is not officially at the Sochi Games, the nation suspended by the International Olympic Committee after it refused to ban corruption-tainted officials from running for elections. The suspension is expected to be lifted after new elections in the coming days, but likely not come in time for Keshavan and two other athletes from India - both skiers - to actually represent their country.

So instead, they will all race under the Olympic flag in Sochi. And in an effort to find a way to represent his country without a flag, Keshavan offered donors a chance to be listed on his uniform. Some of those who backed his quest for the Sochi Games have their names on the white suit that he will wear on race days.

It's not the flag he loves. Nothing replaces that.

"It is upsetting," Keshavan said. "Ultimately, for us, the inspiration is to represent our country. That's what the Olympics are all about. The main thing has been taken away from us, and for quite a shameful reason, a violation of the ethics code - not just a violation, but a refusal to accept the ethics code until we were suspended."

By now, Keshavan has shown he can overcome any challenge.

First of all, there's the obvious one - he's a luger from a country that has no luge track, no luge tradition, barely any real interest in sliding, period. The costs of competing and travel stretch into the tens of thousands of dollars each year. He's worked with teams and coaches from several other nations along the way, most recently pairing up and traveling with USA Luge.

"He really works well with the team," USA Luge coach Mark Grimmette said. "We're really pleased to have him with us. He's a good guy. Somebody from the International Luge Federation approached me and they said that Shiva was looking for a nation to partner with. To us, it made sense, so we discussed it with Shiva over the summer and it worked out."

The relationship is a two-way street. The Americans give Keshavan coaching and support. In return, he and his wife have helped teach them yoga.

"He brings a totally different atmosphere to the team," US men's luger Chris Mazdzer said. "He's the most experienced person out of all of us. He is an awesome yoga teacher. He and his wife, they're both excellent. They bring us through team yoga two or three times a week. He's got a great sense of humour and he really meshes well with the team, which is extremely important."

Keshavan was 16 when he made his Olympic debut, literally half a lifetime ago. He's not a medal threat in Sochi; he's never finished better than 25th at the Olympics, with an average finish of 28.

Medals aren't why he's here. They never really have been.

His legacy is going to be that of a trailblazer. More children are involved in luge in India than ever before, because of him and his story that includes taking a wheeled sled and training, as it were, on the roads of the Himalayas while weaving in and out of traffic. And if his health holds out, there's probably a good chance that Olympics No. 6 will await him in South Korea four years from now.

Promoted
Listen to the latest songs, only on JioSaavn.com
"Once you start sports and you get into the competitive state of mind, you just have to keep pushing yourself," Keshavan said. "It's self-improvement that drives me. I like to keep testing myself. You discover a lot about yourself and how your body can perform under certain conditions. And that gives you lots of satisfaction.