Azadi Row: Kangana Ranaut today seemed to suggest that she called the Congress a "beggar" and cited some select opinions about the party from a history textbook. 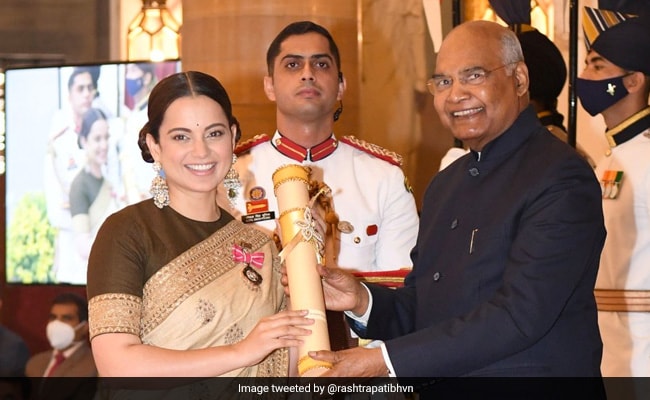 Amid growing calls for revocation of her Padma honour and that the actor be arrested over her azadi comment, Kangana Ranaut today said she will return her Padma Shri and also apologise if only anyone could answer a question of hers.

The actor, in a recent television interview, remarked that India got its freedom in 2014 when Prime Minister Narendra Modi came to power and what it got in 1947 after a decades-long struggle by freedom fighters was "bheekh" or handout.

"Everything is very clearly mentioned in the same interview 1857 first collective fight for freedom... along with sacrifice of greats like Subhash Chandra Bose, Rani Laxmibai and Veer Savarkar ji. 1857 I know but which war took place in 1947 I am not aware, if someone can bring to my awareness I will give back my Padma Shri and apologise also... please help me with this," she posted earlier today on photo-sharing app Instagram. 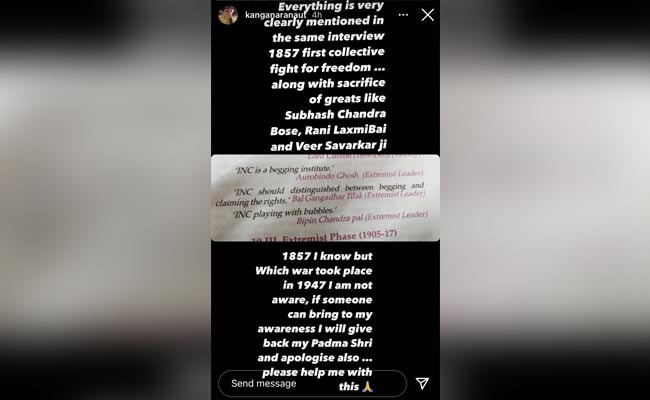 Ms Ranaut, the 34-year-old who stands banned on microblogging platform Twitter over her incendiary right-wing commentary, has spawned many a controversy in the past.

The actor today seemed to suggest that she called the Congress a "beggar" and cited some select opinions about the party from a history textbook. The textbook was not named.

"Just to set the records straight...I am not the only one to call Congress beggar," she said, citing the book. 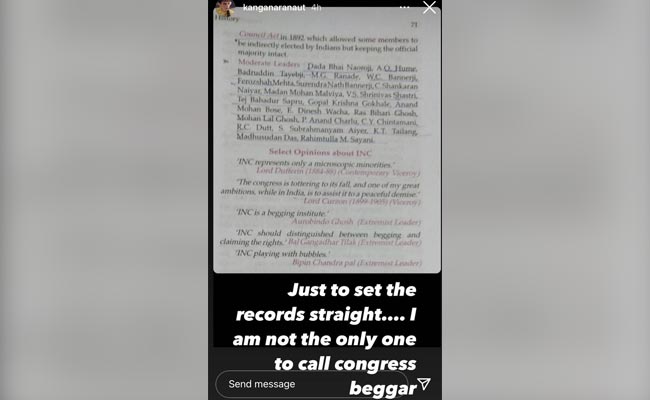 Soon after her "bheek"comments, several political parties have said that Ms Ranaut should be charged with treason for bringing into disrepute India's freedom struggle and its fighters.

Referring to her 2019 period movie "Manikarnika: The Queen of Jhansi", in which she played the role of freedom fighter Rani Lakshmi Bai, the actor said she had done extensive research on the 1857 struggle.

"... nationalism rose so did right wing... but why it died a sudden death? And why Gandhi let Bhagat Singh die... why Neta Bose was killed and never got Gandhi ji's support? why line of partition was drawn by a white man... ?instead of celebrating freedom why Indians killed each other some of the answers I am seeking please help me find answers (sic)," she asked, doubling down on her charge.

She went on to claim that even a "small fight by the INA" would have got India freedom and Subhas Chandra Bose could have been prime minister.

"Why freedom was placed in the begging bowl of congress when right wing was prepared to fight and take it... Can someone please help me understand (sic)," she wrote.

The actor also clarified the part of her statement where she said the country gained "freedom in 2014".

"As far as Aazadi in 2014 is concerned I specifically said physical Aazadi we may have but consciousness and conscience of India was set free in 2014... a dead civilisation came alive and fluttered its wings and now roaring and soaring high..."

Times Now, which aired the interview, distanced itself from the controversy.

"#KanganaRanaut may think India got Independence in 2014 but this cannot be endorsed by any true Indian. This is an insult to millions of freedom fighters who gave up their lives so that present generations can live a life of self-respect & dignity as free citizens of a democracy," the channel said on Twitter on Friday.