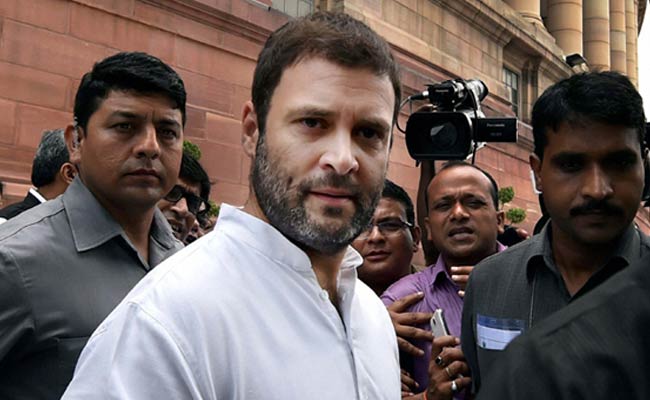 New Delhi: Rahul Gandhi on Thursday defended his party's decision to block Parliament from functioning, stating, "We have said there have to be resignations before any discussion." Mr Gandhi is No 2 in the Congress which is demanding the urgent removal of three top BJP leaders linked to major controversies, including Foreign Minister Sushma Swaraj.

"What we have said is that (there will be) no discussion without resignation. Sushma has done a criminal act. He (Lalit Modi) is a fugitive," Mr Gandhi said about the minister having helped tainted cricket boss Lalit Modi get travel documents in Britain, where he now lives. Mr Modi is wanted in India in corruption cases linked to the Indian Premier League or IPL.

The government has said it is willing to debate what is being called 'Lalitgate' with the opposition, but has rejected calls for the resignations of Ms Swaraj and those of Chief Ministers Vasundhara Raje, also for the Lalit Modi scandal, and Shivraj Singh Chouhan for the Vyapam recruitment scam.

The stand-off between the opposition and the government has meant the first three days of Parliament's 21-day monsoon session have been squandered with noisy disruptions forcing adjournments.

Crucial legislation, including the major tax reform of the National Goods and Sales Tax, are pending.

"Our advice to the PM is this - your credibility is being eroded, listen to the people's concern. Answer them by speaking on the controversies," said Mr Gandhi, who led the campaign for the Congress in last year's election as the party collected its worst-ever result.

Mrs Swaraj has said she is keen to make a statement on her help to Lalit Modi, but the opposition has thwarted the opportunity for a discussion.

The government has said the controversies around Chief Ministers Chouhan and Raje cannot be discussed in Parliament because they are state issues. That stand has been rejected firmly by opposition leaders like Mayawati and Sitaram Yechury.