Will Act In People's Interest: Sachin Pilot Ahead Of Assembly Session

The Congress said it would go for a trust vote to prove its majority in the house, shortly after the BJP said it would move a no-confidence motion against the government 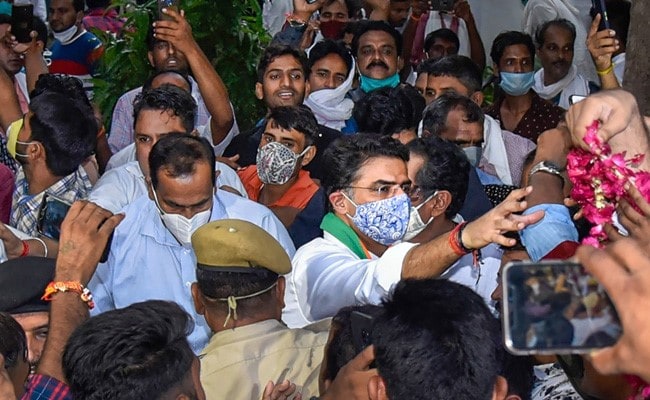 Sachin Pilot and Ashok Gehlot shook hands this evening at a meeting of the legislature party.

Congress's Sachin Pilot, back from his one-month rebellion, tweeted a promise this evening to act in the "interest of the people of Rajasthan" -- an issue likely to be highlighted by the BJP in the special assembly session that begins tomorrow. There was no reference in the tweet about what transpired before -- the events of the last month that had kept the Congress government in Rajasthan on tenterhooks.

"Today took part in the meeting of the Legislative Party with fellow MLAs including Chief Minister Ashok Gehlot ji, organization general secretary KC Venugopal ji, in-charge Avinash Pandey ji, state president Govind Singh Dotasara ji. We are determined to act in the interest of the people of Rajasthan and in accordance with the promises made," the Hindi tweet read.

The tweet was posted after a meeting with his former boss Ashok Gehlot, ahead of the beginning of a special assembly session which the Chief Minister is planning to ask for a trust vote.

Shortly before the Congress's announcement, the BJP had said it would call a no-confidence motion in the assembly. Sources said the party was planning to corner the government on various issues, and highlight their frequent allegation that the Congress had indulged in internal strife during the coronavirus pandemic when the people needed support.

The Congress decision was announced after a meeting of its legislature party -- two of which were skipped earlier by Mr Pilot and 18 MLAs loyal to him. The move had fueled the crisis that brought the government to the brink of collapse and divested Mr Pilot of his posts in the party and government.

The matter was finally resolved on Monday after Mr Pilot's meetings with Rahul Gandhi and Priyanka Gandhi Vadra.

Chief Minister Ashok Gehlot, who during the long stand-off had been free with criticism of his former deputy, tweeted this morning that he was ready to forgive and forget and move on.

At the meeting, where he and Mr Pilot smiled and shook hands before cameras, the Chief Minister pointedly said, "What happened, let us put it behind us. We would have proved our majority even without these 19 MLAs, but that would not have given us any happiness. Kyonki apne toh apne hi hote hain (family is family)".

"We Are On The Side That...": India On Russia-Ukraine War