'Should I Pay From My Pocket?' Arvind Kejriwal Reacts Amid Row Over 3.8 Crore Legal Fee 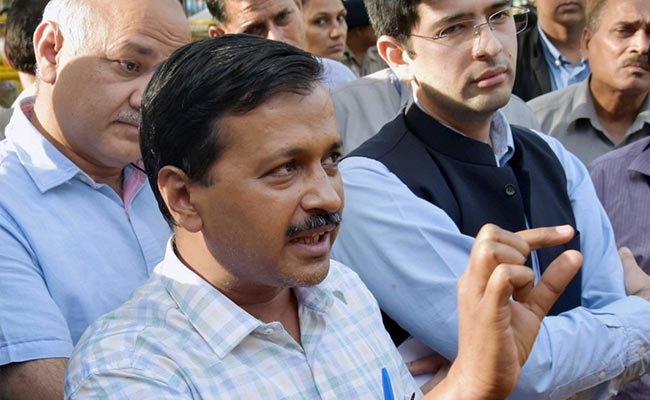 New Delhi: Chief Minister Arvind Kejriwal, breaking his silence on the controversy over Rs.3.8 crore legal bill, said the defamation case against him was filed by Finance Minister Arun Jaitley after he demanded inquiry into alleged corruption in the Delhi Cricket body and therefore he hired top lawyer Ram Jethmalani to defend him then "should I pay from my pocket?"

"In Delhi there was massive corruption in cricket. You must have heard of DDCA (Delhi and District Cricket Association)... Youngsters complained that money is sought for selection. I initiated a probe into it. Then the BJP filed a case against me. We hired top lawyer Ram Jethmalani. They ask why the government should pay. Should I pay from my pocket?" Mr Kejriwal asked the cheering crowd that responded with a loud "no". Mr Kejriwal was addressing a rally in north-east Delhi's Seemapuri on Tuesday evening.

The controversy erupted after the Delhi government attempted to pay a 3.8 crore bill for Mr Kejriwal's lawyer accrued in a civil and criminal defamation case brought against him by Mr Jaitley.

"They want to weaken our fight against corruption," the Delhi Chief Minister said attacking the BJP.

Mr Kejriwal's deputy, Manish Sisodia, who signed off on the legal bills and sent them for clearance to Delhi's Lieutenant Governor Anil Baijal,  said the issue has been raked up to divert the attention from the EVM controversy. "The case has been on for the last one-and-a-half years, but why is it being talked about now? Because they have found themselves in a spot over the EVM controversy."

Arvind Kejriwal on Monday alleged "dangerous" tampering of Electronic Voting Machines (EVM) to rig polls and demanded that the April 23 Delhi civic body elections be deferred so that paper ballots can be used.

Stressing that the legal battle was not Mr Kejriwal's personal, Mr Sisodia said, "When they challenged something which was being probed by the government then the lawyers' bill has to be paid by the government."

Mr Jethmalani has not been paid yet and the Lieutenant Governor has sought the opinion of experts on how to proceed.

Meanwhile, lawyer Ram Jethmalani on Tuesday said that if Mr Kejriwal cannot afford to pay his fee, he will not charge the politician to defend him in court.

The BJP, has slammed Mr Kejriwal and his Aam Aadmi Party for what union minister Prakash Javadekar said amounted to "dacoity" and "looting the people," for wanting to use public money to pay Mr Kejriwal's bills.

Promoted
Listen to the latest songs, only on JioSaavn.com
The case against Mr Kejriwal was filed in 2015 and accuses him of making unsubstantiated allegations of corruption against Mr Jaitley related to the period when he headed the DDCA, the main cricket administration body for Delhi and its surrounding areas.