"Why Allergic To Bengal?": Mamata Banerjee To Centre Over Netaji Tableau

Mamata Banerjee: "Some forces are trying to divide the country over religion, over Hindus and Muslims. I request them to read about Mahatma Gandhi ji, Swami Vivekananda ji and Netaji Subhas Chandra Bose ji." 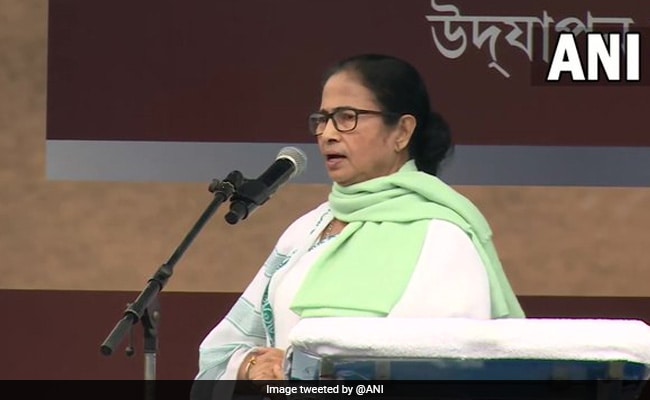 Mamata Banerjee said, "The Centre should have respect for freedom fighters"

Bengal Chief Minister Mamata Banerjee said that the Centre is building Subhas Chandra Bose's statue in Delhi at the same time when it rejected West Bengal's tableau, depicting the role of Netaji in the country's freedom struggle highlighting the indifferent attitude of the Centre's towards the state.

"Why so allergic to Bengal? You (Centre) rejected Bengal tableau (for Republic Day)...You are making (Netaji) statue (in Delhi) because we pressurised you," she said while addressing a public event marking the 125th birth anniversary of Subhas Chandra Bose.

In a veiled attack at the Centre, the Trinamool Congress supremo said, "Some forces are trying to divide the country over religion, over Hindus and Muslims. I request them to read about Mahatma Gandhi ji, Swami Vivekananda ji and Netaji Subhas Chandra Bose ji. None of these personalities ever talked about dividing the country."

Opposing Centre's move to merge the flame of Amar Jawan Jyoti with National War Memorial, she said, "The Centre is doing politics over this matter. We pay homage to all martyrs and freedom fighters. The Centre cannot create differences among soldiers who lost their lives for the nation. I challenge no one can delete the history of Bengal and India. If they do so, they are playing with fire."

"The Centre should have respect for freedom fighters. In the statue of Netaji Bose being built in the national capital, you can write the birthday of Netaji, but what about the date of his death? The Centre yet is unable to find out," she added.

Speaking on this further, Ms Banerjee said, "Till today we don't know about Netaji's whereabouts. They (Centre) had said that when they come to power, they will work on it but nothing happened. In fact, we (state) have released and declassified all files on Netaji Bose."

Subhas Chandra Bose had also established the Azad Hind Fauj. While there is a controversy over Bose's death in a plane crash in Taipei on August 18, 1945, the Central government had in an RTI (Right to Information) in 2017 confirmed that he had died in the incident.

In a first, India will begin Republic Day celebrations from January 23 instead of January 24, to include the birth anniversary of late freedom fighter Netaji Subhas Chandra Bose. It will end on January 30, the day Mahatma Gandhi was assassinated.

To commence the celebrations of Republic Day, Prime Minister Narendra Modi, on the occasion of Netaji's 125th birth anniversary, will unveil the hologram statue of the freedom fighter at India Gate in Delhi on Sunday at around 6 pm.

On January 21, the Prime Minister informed that a grand granite statue of Netaji Subhas Chandra Bose will be installed at India Gate soon. The Prime Minister has said that till the time the work for the "grand statue" of Netaji, made of granite, is completed, a hologram statue would be installed at the same place. India celebrates Republic Day on January 26 every year.