Who was K Karunakaran? 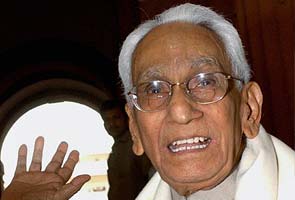 Thiruvanthapuram: Affectionately called 'Leader' by his admirers, Congress stalwart Kannoth Karunakaran was a master tactician who remained a 'King' in Kerala politics for decades and at times a much sought after political troubleshooter at the national level.

Considered a close lieutenant of former prime ministers Indira Gandhi and Rajiv Gandhi, the four-time former Kerala chief minister has been credited with creating in the 1970s a rainbow coalition--the United Democratic Front(UDF)-- that has sustained itself on the support from different social, caste and religious groups as a powerful bloc to take on CPI(M)-led Left Democratic Front(LDF).

A former Union Industries Minister, the dimunitive 93-year-old politician with a trade-mark hump and rasping staccato sentences had an amazing capacity for political survival except for brief breaks and showed no signs of let up in ambitions even in his sunset years.

Initiated in politics in 1935 at the age of 19 when he became a member of the state Congress led by M Narayana Menon, Karunakaran, often criticized for apparent nepotism, first became chief minister on March 25, 1977.

Karunakaran, who has proved for decades that Kerala politics can still be his playing field, has often been accused of turning senile in his later years but he was not ready to say goodbye to his political career spanning over seven decades.

Even when he was in his late eighties, his political manoeuvring was just as dexterous, mental agility just as remarkable and wit and sarcasm just as biting as ever.

An inscrutable political leader known for his steadfast devotion to Lord Krishna, the presiding deity at the famed Guruvayoor temple in Kerala, Karunakaran has always been a wily political player and, through sheer hard work and lots of luck, has donned a variety of roles--as trade union leader, the Opposition leader, a union minister or the chief minister.

He has been a Congress(I) father figure who built the party "from a group of nine MLAs in 1967" through two divisions in 1969 and 1978 to a strength of 57 in the 1991 Congress(I)-led UDF Ministry. The big break in his career came in 1967 with the party choosing him to lead the nine-member Congress bloc after the party was humbled by the LDF.

When his colleagues pushed him out of power while he was serving as chief minister for the fourth time, it rankled him no end.

The feeling of being dispossessed has led him to seek revenge at every opportunity ever inviting criticism from his opponents accusing him of trying to wreck the Congress in Kerala.

Karunakaran and A K Antony-- now the Defence Minister and a former chief minister--were dubbed  the political Tom-and-Jerry equivalents who ran each other in circles for over two decades, to the consternation of the state.

Karunakaran has been the Chief Minister of Kerala four times but completed his full five-year term only once from 1982 to 1987. All the four state ministries under him were however tainted with allegations of nepotism and corruption.

A key accused in palmolein import scam which has also sucked in the current Central Vigilance Commissioner P J Thomas, Karunakaran as chief minister had decided to import 15,000 tonnes of palm oil at 405 USD per tonne from a Singapore-based firm whereas the prevailing market price was 392 USD per tonne.

He took charge as Chief Minister for the first time on March 25, 1977. However he tendered his resignation within a month immediately following certain references by the Kerala High Court in what came to be known as Rajan case.

Rajan, an engineering student in Calicut who led anti-Emergency protests, was allegedly killed by the police at Kakkayam police camp. Karunakaran was the Home Minister from 1971 to 1977 in the Ministry headed by C Achutha Menon.

Karunakaran took charge as Chief Minister again on December 28, 1981. However, this ministry did not last long.
He resigned on March 17, 1982 following the withdrawal of support by a member of the Kerala Congress (M). Mid-term elections to the 7th Kerala Legislative Assembly was held on May 19, 1982.

After Antony was elected as chief minister in 2001, Karunakaran was on the warpath with the Government led by his own party and the party high command. After a series of unsuccessful attempts to regain supremacy in the Kerala wing of the Congress, the dissidents led by him landed up in the bad books of the Congress high command.
Comments
K KarunakarandiesThiruvananthapuram