The police had approached Google for help in identifying the author of an email warning the CBSE about the Class 10 maths paper leak. 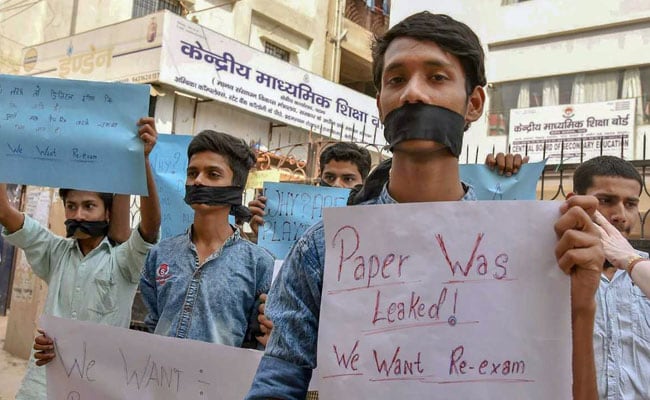 Students have protested against the CBSE over the school board test paper leak.

New Delhi: The person who had warned the CBSE or Central Board of Secondary Education on the night before the Class 10 math test that the question paper had leaked has been identified by the police. He is being questioned by the cops who had reached out to Google to trace the email address. His identity, however, has not been revealed.

News agency PTI had reported earlier in the day that the Delhi Police's Crime Branch had received a reply from Google on the details it had sought about the email address from where the CBSE chairperson was sent a mail about the mathematics paper being leaked. A senior police officer said they had got a reply from the internet giant but refused to divulge further details.

CBSE Chairperson Anita Karwal had received an e-mail at about 1:30 am on the night before the exam, which was held on March 28, informing her about the paper being leaked. The mail also contained 12 images of the handwritten mathematics paper allegedly leaked on WhatsApp. The board, however, did not scrap the test despite the email being one of many such warnings it had received. Instead, 90 minutes after the exam, it filed the second complaint with the police. Education Secretary Anil Swarup said yesterday there wasn't enough time to cancel the exam.

The police continued with their efforts to trace the origin of the paper leak as they visited more schools and coaching centres in outer Delhi that had come under their scanner. The police say in all about 53 students and seven teachers have been questioned so far. Six WhatsApp groups that were involved in sharing the papers are also being looked into.

Promoted
Listen to the latest songs, only on JioSaavn.com
The police had registered separate cases on March 27 and March 28 to probe the leak of the Class 12 economics paper and Class 10 mathematics paper, following a complaint by the regional director of the CBSE. The Class 12 economics and Class 10 mathematics exams were held on March 26 and March 28 respectively.