The BJP has been targeting Rahul Gandhi over his temple visits

Details of Rahul Gandhi's gotra have been "revealed" by a priest in Rajasthan, where the Congress president visited a temple while campaigning on Monday for the December 7 state election. He is a "Dattatreya" and a Kashmiri Brahmin, said a priest in a temple by the famous lake Pushkar.

That answers a question raised by BJP spokesperson Sambit Patra, who had last month targeted Rahul Gandhi over his party's pronouncement -- to justify his temple visits in poll-bound states -- that he is a "janeu-dhari Brahmin".

"Rahul Gandhi wears a janeu (sacred thread). We want to ask him what kind of jenau-dhari are you? What is your gotra," questioned Sambit Patra, speaking in Madhya Pradesh, which is among the states where elections are being held. Rahul Gandhi is a "Dattatreya" and a Kashmiri Brahmin, said a priest

"His gotra is Dattatreya and he is a Kashmiri Brahmin. Motilal Nehru, Jawaharlal Nehru, Indira Gandhi, Sanjay Gandhi, Maneka Gandhi and Sonia Gandhi have come and offered prayers at the ghat and it is recorded with us," Dinanath Kaul, the Rajasthan priest, told reporters.

He claimed to have old records of the Nehru-Gandhi family tree. He also told reporters that his ancestors had performed special pujas with Jawaharlal Nehru (India's first prime minister and Rahul Gandhi's great-grandfather) and his father Motilal Nehru at the Pushkar Sarovar.

"(Rahul) Gandhi came and offered prayers at the ghat. He also said his gotra is Dattatreya. Dattatreya are Kauls and Kauls are Kashmiri Brahmin," said Dinanath Kaul, offering a glimpse of the family records.

The Congress chief yesterday also visited the Ajmer shrine before addressing a string of election rallies. 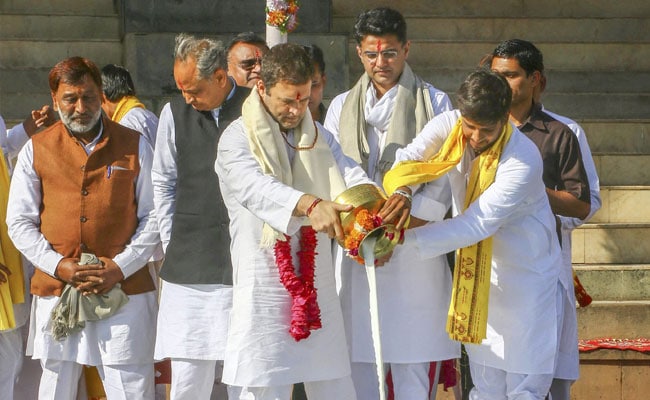 The priest claimed to have old records of the Nehru-Gandhi family tree.

The back-and-forth on religion, caste and gotra -- which refers to a clan or a descendant from a common ancestor -- have drawn eye-rolls from critics who have bemoaned the sharp dive in the quality of political discourse this election season.

The results of the state elections will be announced on December 11.