"What's My Fault?": Punjab's Ex-Minister On Being Dropped From New Cabinet

Earlier, a section of Congress leaders from the state had written to party's state unit chief Navjot Singh Sidhu demanding that "tainted" former minister Rana Gurjit Singh should not be included. 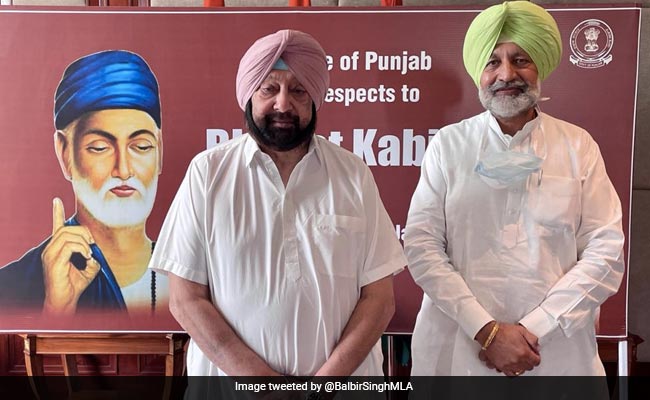 Hours before the first cabinet expansion of the Charanjit Singh Channi-led Punjab government, a group of ministers in the previous Amarinder Singh government on Sunday questioned the apparent decision to drop them.

Earlier, a section of Congress leaders from the state had written to party's state unit chief Navjot Singh Sidhu demanding that "tainted" former minister Rana Gurjit Singh should not be included.

The leaders also demanded that the cabinet berth may instead be filled up "by giving representation to a clean Dalit leader". The copy of the letter was also sent to Chief Minister Charanjit Singh Channi.

In another development, ministers in the previous Amarinder cabinet - Balbir Singh Sidhu and Gurpreet Singh Kangar, held a joint news conference in Chandigarh shortly before the cabinet expansion, and asked what was their fault that they had been dropped.

Balbir Sidhu even broke down while asking "what is my fault?" while Kangar, too posed the same question.

Seven new faces are likely to be inducted in the Punjab cabinet while five ministers, who were part of the Amarinder Singh-led government, are dropped.

Amloh legislator Randeep Singh Nabha, who was learnt to be upset over being ignored for the ministerial post in the new cabinet, has been given a cabinet berth.

However, the list of names is yet to be officially declared.

Balbir Sidhu held health portfolio and Revenue department was with Kangar. Both detailed several initiatives taken for the welfare of people and said they had worked hard and left no stone unturned.

"I want to ask party high command what is my fault and why I was excluded," asked Balbir Sidhu, as he broke down and his voice was choked with emotion.

"I am a soldier of Sonia Gandhi," he said.

"They should have asked for my resignation and I would have given it happily... People of my area are disappointed. I am not upset with losing my ministry, I have no greed for power. But I want ask what was the need to humiliate us?," he said.

He recalled he had made himself available round-the-clock when Covid pandemic was at its peak.

He said he and his entire family too had contracted Covid earlier.

He said despite performing he has been punished.

Rana Gurjit Singh, after facing flak from the Opposition over allegations of impropriety in the auction of sand mining contracts, had to resign from the previous Amarinder Singh cabinet in 2018. At that time, he had held Irrigation and Power portfolios.

In the letter to Mr Sidhu, these leaders demanded to drop Rana Gurjit Singh from the proposed cabinet berth, alleging that "he is a known corrupt and tainted politician of Doaba".

Khaira had defected from the Aam Aadmi Party and joined Congress recently.

"We the undersigned MLAs and leaders of Doaba wish to convey huge resentment amongst the public and the Congress cadre on the proposed inclusion of tainted Rana Gurjit Singh.

"Needless to mention, he was dropped from the cabinet in January 2018 due to the infamous mining scandal...," they alleged in the letter while detailing various allegations which were made against Rana Gurjit at that time.

"We wonder why Rana Gurjit Singh is being included in Cabinet as he was dropped in January 2018 because of these charges..," they wrote.

They also pointed out that despite the Doaba region having approximately 38 percent Dalit population, no representation in the proposed cabinet expansion has been given to a leader from the community and demanded inclusion of a "clean Dalit face.."

Six-time MLA Rakesh Pandey too expressed unhappiness over the proposed names in the expansion claiming seniors were ignored.

Meanwhile, Balbir Sidhu said he has also written to party senior leadership including Sonia Gandhi, Rahul Gandhi and Priyanka Gandhi Vadra, asking "what is my fault..".

Kangar recalled that when he held Power department portfolio, he had made himself available round-the-clock to the people and he used to attend to complaints related to power even late in the night and try to resolve it immediately.

However, both Balbir and Kangar said they congratulate those who are being inducted and assured their full support to the new team led by Charanjit Singh Channi, who recently became the chief minister after unceremonious exit of Amarinder Singh.