What is the Jan Lokpal Bill, why it's important 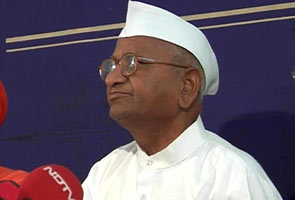 The Jan Lokpal Bill (Citizen's ombudsman Bill) is a draft anti-corruption bill drawn up by prominent civil society activists seeking the appointment of a Jan Lokpal, an independent body that would investigate corruption cases, complete the investigation within a year and envisages trial in the case getting over in the next one year.

Drafted by Justice Santosh Hegde (former Supreme Court Judge and former Lokayukta of Karnataka), Prashant Bhushan (Supreme Court Lawyer) and Arvind Kejriwal (RTI activist), the draft Bill envisages a system where a corrupt person found guilty would go to jail within two years of the complaint being made and his ill-gotten wealth being confiscated. It also seeks power to the Jan Lokpal to prosecute politicians and bureaucrats without government permission.

Retired IPS officer Kiran Bedi and other known people like Swami Agnivesh, Sri Sri Ravi Shankar, Anna Hazare and Mallika Sarabhai are also part of the movement, called India Against Corruption. Its website describes the movement as "an expression of collective anger of people of India against corruption. We have all come together to force/request/persuade/pressurize the Government to enact the Jan Lokpal Bill. We feel that if this Bill were enacted it would create an effective deterrence against corruption."

Anna Hazare, anti-corruption crusader, went on a fast-unto-death in April, demanding that this Bill, drafted by the civil society, be adopted. Four days into his fast, the government agreed to set up a joint committee with an equal number of members from the government and civil society side to draft the Lokpal Bill together. The two sides met several times but could not agree on fundamental elements like including the PM under the purview of the Lokpal. Eventually, both sides drafted their own version of the Bill.

The government has introduced its version in Parliament in this session. Team Anna is up in arms and calls the government version the "Joke Pal Bill." Anna Hazare declared that he would begin another fast in Delhi on August 16. Hours before he was to begin his hunger strike, the Delhi Police detained and later arrested him. There are widespread protests all over the country against his arrest.

The website of the India Against Corruption movement calls the Lokpal Bill of the government an "eyewash" and has on it a critique of that government Bill.

A look at the salient features of Jan Lokpal Bill:

1. An institution called LOKPAL at the centre and LOKAYUKTA in each state will be set up

2. Like Supreme Court and Election Commission, they will be completely independent of the governments. No minister or bureaucrat will be able to influence their investigations.

3. Cases against corrupt people will not linger on for years anymore: Investigations in any case will have to be completed in one year. Trial should be completed in next one year so that the corrupt politician, officer or judge is sent to jail within two years.

4. The loss that a corrupt person caused to the government will be recovered at the time of conviction.

5. How will it help a common citizen: If any work of any citizen is not done in prescribed time in any government office, Lokpal will impose financial penalty on guilty officers, which will be given as compensation to the complainant.

6. So, you could approach Lokpal if your ration card or passport or voter card is not being made or if police is not registering your case or any other work is not being done in prescribed time. Lokpal will have to get it done in a month's time. You could also report any case of corruption to Lokpal like ration being siphoned off, poor quality roads been constructed or panchayat funds being siphoned off. Lokpal will have to complete its investigations in a year, trial will be over in next one year and the guilty will go to jail within two years.

7. But won't the government appoint corrupt and weak people as Lokpal members? That won't be possible because its members will be selected by judges, citizens and constitutional authorities and not by politicians, through a completely transparent and participatory process.

8. What if some officer in Lokpal becomes corrupt? The entire functioning of Lokpal/ Lokayukta will be completely transparent. Any complaint against any officer of Lokpal shall be investigated and the officer dismissed within two months.

9. What will happen to existing anti-corruption agencies? CVC, departmental vigilance and anti-corruption branch of CBI will be merged into Lokpal. Lokpal will have complete powers and machinery to independently investigate and prosecute any officer, judge or politician.

Promoted
Listen to the latest songs, only on JioSaavn.com
10. It will be the duty of the Lokpal to provide protection to those who are being victimized for raising their voice against corruption.