What is a cloudburst? 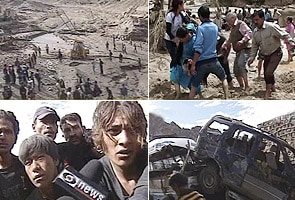 New Delhi: A cloudburst is a sudden downpour within a radius of few kilometres. It usually lasts no longer than few minutes but is capable of flooding the area.

Rainfall from a cloudburst is usually over 100 mm per hour.

Cloudbursts descend from very high clouds, sometimes with tops above 15 kilometers. Rapid precipitation is possible due to large droplets growing rapidly by coagulating with smaller droplets, which normally fall down slowly.

Promoted
Listen to the latest songs, only on JioSaavn.com
In one of India's worst cloudbursts on 26 July 2005, Mumbai was completely paralysed. Approximately 950 mm of rainfall was recorded in India's financial capital over a span of eight to ten hours.

Leh recorded over 12 mm of rainfall in just few minutes in Friday's cloudburst, that at least 115 dead, and hundreds injured.