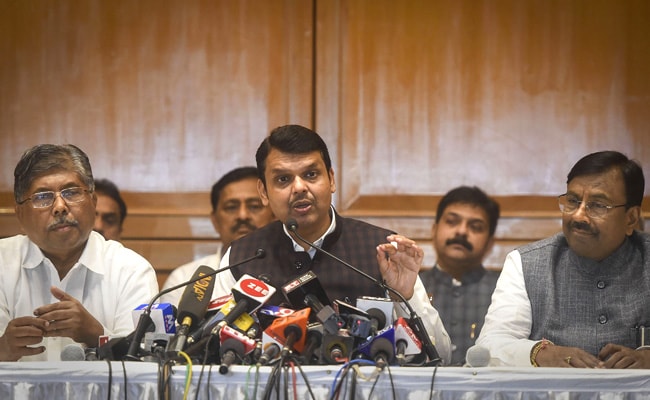 Devendra Fadnavis said Chief Minister Eknath Shinde has given all the clearances for the project.

The Maharashtra government has given all the clearances for expediting the Mumbai-Ahmedabad bullet train project, Deputy Chief Minister Devendra Fadnavis said on Thursday.

The development comes barely a fortnight after the change in government in the western state. The previous Maha Vikas Aghadi (MVA) government headed by Shiv Sena president Uddhav Thackeray had not taken any step to put the project on fast-track.

Addressing a press conference in Mumbai after the state cabinet meeting, Devendra Fadnavis said Chief Minister Eknath Shinde has given all the clearances for the project.

The pending issues were related to the forest clearances and land acquisition, among others, he said.

Sources in Delhi said that over the past few days, the Eknath Shinde government cleared long pending issues related to the project.

The Mumbai Metropolitan Region Development Authority (MMRDA) has issued directives to shift a petrol pump of BPCL located on a plot at BKC earmarked for the terminus of the high-speed train to be constructed as three-storey underground structure and will have six platforms on the lowest level, the sources said.

About 1.2 hectares of land in Palghar, Maharashtra, has been handed over to the project last week which was earlier stuck up for months, they said. With this, 90.56 per cent land (98.8 per cent in Gujarat and 100 per cent in Dadra Nagar Haveli and 72.25 per cent in Maharashtra) has been acquired for the entire project.

In a review meeting on July 12, the government has committed that issues involving transfer of land for BKC underground station (4.84 hectare) and 3.92 hectare at Vikroli for tunnel shaft will be resolved by September.

For bullet train project alignment passing through the forest area, stage I clearance has been granted by the Maharashtra government and stage II approval is also expected by September, the sources said.

"So far, foundation and pier works have been completed in 75 km stretch of the 352-km-long Gujarat portion of the project. The works on bridges on rivers and launching of girders for viaduct in 180 km length of alignment are going on in full swing. The works on all eight stations between Vapi and Sabarmati are also under various stages of construction.

"The Sabarmati passenger hub is nearing completion, which will provide seamless multi-modal connectivity to various inter and intra city transport. Contracts for all civil and track packages have already been awarded in Gujarat portion of the bullet train project alignment. It is expected that trial run between Vapi-Sabarmati may be conducted in 2026 and the section in Gujarat portion i.e. Sabarmati-Vapi is likely to be fully operational in 2027," a source privy to the development said.

The project had been put on the back burner by the MVA government. Thackeray had instead asked the railway ministry to build a high-speed train corridor between Pune and Nagpur cities.

The estimated cost of the Mumbai-Ahmedabad bullet train project is Rs 1,10,000 crore, out of which Rs 88,000 crore are being funded by the Japan International Cooperation Agency (JICA). Over 70 per cent land required in Maharashtra for the project has been acquired in Thane and Palghar districts.

In the 14th Joint Committee meeting held between India and Japan on June 30, 2022 and headed by Minister of Railways from Indian side, both sides agreed for the modalities for procurement of E5 series Shinkansen Rolling Stock, and now all the pending issues of Rolling Stock procurement such as interfacing, integration, testing and trial of Rolling Stock are going to be resolved soon, the sources said.

E5 series Shinkansen bullet trains, which can travel up to a speed of 360 kmph, are part of a new generation Japanese high-speed train (also called Hayabusa) introduced into commercial operation in March 2011 in Japan which are designed to be more comfortable and faster than ever before.

Prime Minister Narendra Modi and his then Japanese counterpart Shinzo Abe had laid the foundation of the bullet train project in Ahmedabad in September 2017. The train is expected to cover the distance of over 500 km in around two hours.