What caused the floods? 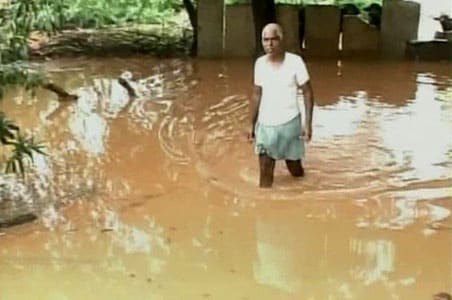 Hyderabad: After a severe drought, what led to the massive scale of floods in Karnataka and Andhra Pradesh? Blame it on the rain, you could say. Irrigation officials say this is probably the maximum possible flood in 10,000 years. But could it have been better managed? NDTV tracks the causes for the floods.

Unprecedented rains in North Karnataka on Thursday flooded several districts, cutting off areas like Bijapur, Bagalkot and Bellary. Karwar for instance got 50 cm of rain in a single day. Locals called it the heaviest downpour in 50 years.

The waters inundated the Krishna and Tungabhadra rivers and the Karnataka government released upto 8 lakh cusecs of water from the Almatti and Narayanpur dams, in a single day.

From the last week of September, Andhra Pradesh was experiencing heavy rains, some areas got over 30 cm in a single day. This brought heavy inflows into major projects in Krishna Basin like Jurala, Srisailam, Nagarjunasagar, Prakasam Barrage and Sunkesula.

Early on Friday, reports started coming in of water levels rising dangerously in the border town of Mantralayam in Andhra Pradesh.

By evening, the water level had crossed the danger mark in Srisailam dam. In a single day on Friday, the reservoir had received over 25 lakh cusecs of water in 12 hours, whereas it is designed to get no more than 13.6 lakh cusecs. This is the probable maximum flood predicted once in 10,000 years.

On Saturday, the maximum water limit was crossed in Srisailam, Jurala and Sunkesula projects causing inundation in many villages in the backwaters. Kurnool town and several villages in Kurnool, Mahbubnagar and Nalgonda districts were flooded.

From the Srisailam dam, the waters were flowing into Nagarjunasagar dam. On Sunday morning, 10.85 lakh cusecs were released to keep the masonry dam safe.

The waters that reached Prakasam Barrage in the coastal Krishna district on Monday have submerged hundreds of villages. Prakasam Barrage has never received such huge amounts of water in the last 100 years.

Critics point out that the Andhra Pradesh government could have better anticipated and prepared for systematic release of waters from the Sukeshu, Srisailam and Nagarjunasagar dams before matters got really out of hand.

The Andhra Pradesh government, however, points out that it is the first time in history that the scale of floods has been so massive.

Promoted
Listen to the latest songs, only on JioSaavn.com
"This is known as PMF or possible maximum flood, which happens once in 10,000 years,'' says Geetha Reddy, the state's information minister.

Meanwhile, the Met Dept has said there is likely to be a letup in rains. Karnataka says it will release minimum waters. So the waters in the major dams may be safely regulated.