West Bengal Governor Jagdeep Dhankhar had said earlier this week that he will visit places in Cooch Behar and interact with victims of post-poll violence. 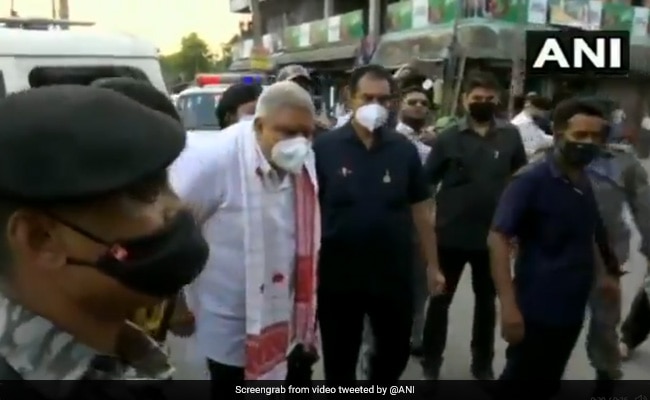 West Bengal Governor Jagdeep Dhankhar, who is on a visit to areas affected by post-poll violence in the state, was shown black flags by a group of people who also raised slogans in Sitalkuchi in Cooch Behar district on Thursday.

Mr Dhankhar had said earlier this week that he will visit places in Cooch Behar and interact with victims of post-poll violence.

As part of my constitutional duty, I've decided to visit affected parts in State and asked the government to make arrangements. Unfortunately, their response hasn't been very responsive. I'll go ahead with my schedule and make arrangements for a self visit in the coming days," he had said.

#WATCH | West Bengal: A group of people block the path of Governor Jagdeep Dhankhar's car and raise slogans in Dinhata, Cooch Behar. The Governor is visiting the post-poll violence-affected areas of the district. pic.twitter.com/ceZtbFCaAg

He had also called upon the Mamata Banerjee government to "restore credibility and bring to book the culprits who have chosen to tarnish our democratic fabric".

Mr Dhankhar had said on Wednesday that he will visit Ranpagli and Srirampur camps in Assam on May 14 where "post-poll violence victims from West Bengal have taken refuge".

BJP alleged that nine of its party workers have been killed in the post-poll violence. However, the Trinamool Congress (TMC) has refuted the allegations.

Sitalkuchi had seen violence during the assembly polls. Four people were killed in firing by central forces there in the fourth phase of polling. Central Industrial Security Force (CISF) had said that its personnel opened fire in self-defence after a mob attacked them and tried to steal their weapons.

Incidents of violence have been reported in several parts of the state following declaration of West Bengal Assembly poll results on May 2.