Abhishek Banerjee also accused BJP of giving grants of Rs 10,000 to each club in West Bengal and asking them to organise feasts and vote for the party 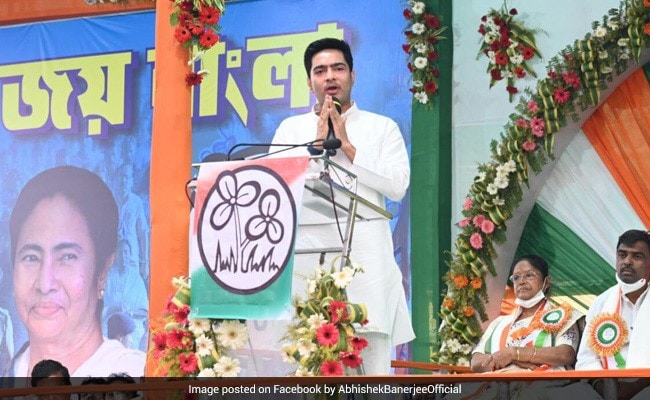 There will be anarchy in the state if BJP assumes power in Bengal, Abhishek Banerjee cautioned the voters

Trinamool Congress MP Abhishek Banerjee on Monday accused the BJP of distributing cash for votes in West Bengal and asked the people to accept the money but exercise their ballot for TMC instead.

There will be anarchy in the state if the BJP assumes power in West Bengal, Mr Banerjee cautioned the voters.

"BJP is distributing money to the people and asking them to cast their votes for the party. I ask you (the people) to accept the money and not return it, but cast your votes for the smaller flower, referring to the grass flower which is the symbol of TMC and the much larger lotus, the emblem of the BJP. It's your money. The money is from the tax you have paid to the government," Mr Banerjee said addressing different rallies held in Hooghly and Howrah districts in support of party candidates contesting for the phase four of polling slated for April 10.

"If BJP comes to power in Bengal, there will be anarchy throughout. I will urge you not to vote for them if you want to live without any fear. Look at what is happening in UP and other states where they are in power. It's time for you to realize the ground situation and cast your vote. Do you want to have Biriyani a single day or have rice and dal for the next five years ... It depends on you to decide," he said.

Polling will be held in 44 assembly seats spread over the districts of Howrah (Part II), South 24 Parganas (Part III). Hooghly (Part II), Alipurduar and Coochbehar in the fourth phase.

Mr Banerjee also accused BJP of giving grants of Rs 10,000 to each club in West Bengal and asking them to organise feasts and vote for the party.

If BJP comes to power in the state it will stop the Swasthya Sathi (cashless health) scheme initiated by TMC supremo Mamata Banerjee and instead implement Ayushman Bharat for which only a few will be enrolled as per the central scheme's eligibility.

"You will not get free health service then. As per the eligibility criteria of Ayushman Bharat scheme even a person who has a refrigerator is not eligible for it," he said.

Challenging the party to come out with its performance report of the last seven years, Mr Banerjee said, "You (BJP) are claiming to be the world's biggest political party, but if you compare your report card and that of ours we will beat you by 10-0 goals. I will quit politics if I am lying."

The common people had faced a lot of hardship due to demonetization and the "unplanned" lockdown to check COVID-19 in 2020.

Prime Minister Narendra Modi had forced people to stand in queues outside banks, while Mamata Banerjee made them wait for their turn outside ration shops for free rice and wheat, the TMC MP said.

He also accused BJP of selling the country in its bid at privatisation of Railways as well as the nationalised banks.

Lambasting the Modi government at the centre, he said, "The BJP is selling the country. Look what they (the BJP) have done to it - prices of LPG and fuel have shot up. Is this acche din?"

"The same leaders are asking for votes to turn Bengalinto Sonar Bangla (prosperous Bengal) ... Sonar Bangla has been already built by Mamata Banerjee and that is why she has been internationally acclaimed for her Kanyashree scheme."

The Kanyashree Prakalpa is a conditional cash transfer scheme to improve the status and well being of the girl child in West Bengal by incentivizing schooling of all teenage girls and delaying their marriage until they attain the age of 18.

The scheme has won national and international recognition for its design and features of good governance.

Hitting out at BJP's Chuchura candidate and BJP MP Locket Chatterjee, Mr Banerjee said, "I have never heard her speaking about her plans to develop Hooghly district. Her only job is to criticise Mamata Banerjee and to appease the party leadership."

BJP knows nothing of the state or its culture, he said referring to BJP''s allegations that Durga Puja and Saraswati Puja are not allowed to be held in West Bengal.

"The BJP is alleging that Mamata Banerjee does not allow Durga Puja to be held in West Bengal. Do they have any knowledge that under Didis leadership how many Durga Pujas are organised in the state? The clubs get special encouragement fund from the government to do so.

"... They (the BJP) have no knowledge about the Bengalis nor about our culture ... Will you allow "outsiders" to rule the state?" he asked.