S Jaishankar is on a visit to the US for bilateral consultations with several ministers, including his counterpart Antony Blinken. 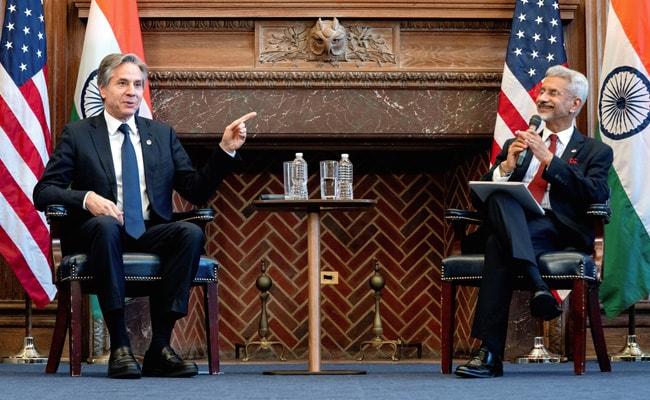 The US today reiterated Prime Minister Narendra Modi's recent comment on the Ukraine conflict -- that "this is not the era of war". Citing the remark during a discussion with foreign minister S Jaishankar, US Secretary of State Antony Blinken said, "We couldn't agree more".

During a bilateral meeting with Russian President Vladimir Putin on the sidelines of the Shanghai Cooperation Organisation summit in Samarkand, PM Modi had said "this is not an era of war". The remark was seen by many nations as a public rebuke. Many in the US government had welcomed the comment.

Russian ambassador to India Denis Alipov had brushed it off, saying "The West uses only those quotes that suit them while ignoring other parts".

Speaking at a joint press appearance with Mr Jaishankar today, Mr Blinken said that the US has tried everything possible to avert the Ukraine conflict through diplomacy.

"Unfortunately, tragically, President Putin pursued his aggression, nonetheless. And now not just the Ukrainian people, but also the world are reaping the consequences," he said.

"I really want to emphasise on what Prime Minister Modi said because I think he captured as well as anyone I've heard, fundamentally, what this moment is about as he said, 'this is not an era of war'. We could not agree more," Mr Blinken said in response to questions.

"I think it's very important... that a voice as consequential as India's make themselves heard. And that's why I thought that the Prime Minister's comments were so significant," he added.

The US, Mr Blinken said, has tried everything possible to avert the Ukraine conflict through diplomacy. Now only one person has the ability to stop the hostilities and that's Mr Putin. "If Russia stops fighting, the war ends. If Ukraine stops fighting, Ukraine ends," he added.

Mr Jaishankar is on a visit to the US for bilateral consultations with several ministers, including his counterpart Mr Blinken.

Briefing the media after the meeting, Mr Jaishankar said the discussion was on political coordination, and assessment on regional and global challenge.

The two leaders also had a "brief discussion" on price cap on Russian oil, on which developing nations have a deep concern, Mr Jaishankar said. "Energy markets in great stress. Countries in the global south have found it hard to maintain availability," he added.

"We are working with partners so that oil revenues don't fuel the Ukrainian war," Mr Blinken added at the joint press conference.