The Central Water Commission said studies are being conducted keeping in mind the forecast of the India Meteorological Department that the area could receive a rainfall of 1 cm and snowfall of 10 cm on February 15 and 16. 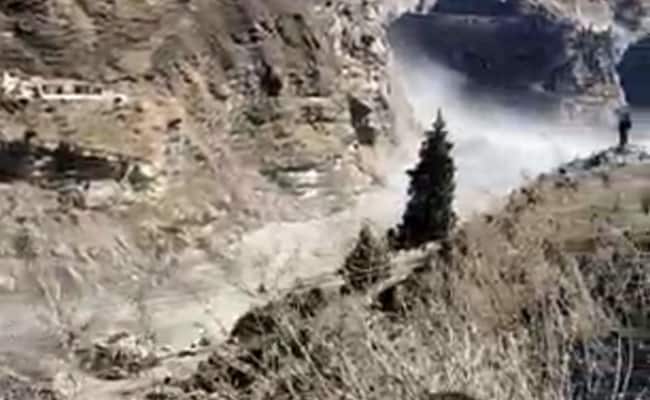 An artificial lake formed in the upper stretches of Rishiganga river after the floods. (File)

The Central Water Commission (CWC) is conducting simulation studies on the artificial lake formed in the upper stretches of the Rishiganga river after the catastrophic Uttarakhand flood early this week, and also examining the possibility of carrying out a controlled blast to drain out the water.

CWC chairman Saumitra Haldar on Saturday said studies are being conducted keeping in mind the forecast of the India Meteorological Department (IMD) that the area could receive a rainfall of 1 cm and snowfall of 10 cm on February 15 and 16.

The CWC is also examining possibilities of what can be done if the water to rises to "critical" level.

"We are assessing what could be the impact if the water level rises following rains and snowfall as predicted by the IMD. We are also studying what volume of water would be released if the lake bursts and how much time it would take to reach downstream," Mr Haldar said.

"We don't want the size of the lake to increase any further. We are examining all possibilities that also include controlled blast at the lake," Mr Haldar said.

He, however, pointed out that the site is not accessible and it has not been decided which agency will execute the controlled blast.

"So in case if the controlled blast is not possible, we are also exploring other ways to tackle the situation," he added.

The temporary water body was formed after sediments that the Sunday's flash floods brought down, blocking the mouth of a stream that joins the Rishiganga river.

The CWC chairman said as of now there is no increase in the water level from Joshimath to Haridwar. "We are continuously monitoring the water levels downstream," he said.

In a tweet on Friday, the CWC said: "An artificial Lake has formed on river Rishiganga in Chamoli district, Uttarakhand, with a length of 350 m height of 60 m with slope of 10 deg."