IAF: In this manoeuvre, the Sukhoi-30MKI came in from a low altitude and took a high speed turn upwards as it rolled several times till it levelled out after a certain height 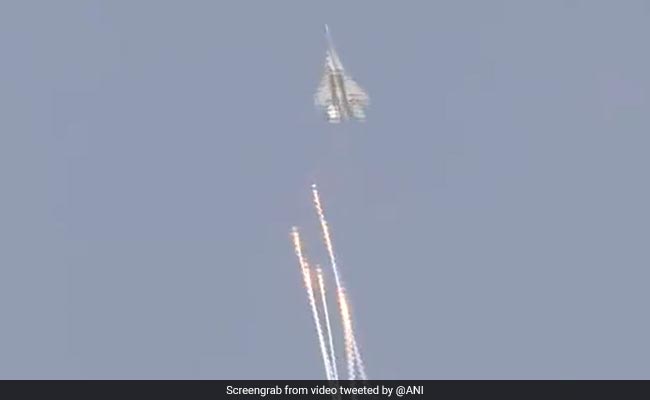 A Sukhoi-30MKI multirole fighter jet of the Indian Air Force carried out a high-speed manoeuvre known as the "vertical Charlie" in a salute to Air Chief Marshal RKS Bhadauria at Hindon Air Base in Uttar Pradesh's Ghaziabad today, news agency ANI reported.

In this manoeuvre, the Sukhoi-30MKI came in from a low altitude and took a high speed turn upwards as it rolled several times till it levelled out after a certain height. The two-seater fighter jet dumped high-intensity flares for effect as it gained altitude.

"#AFDay19 : As the Indian Air Force prepares to celebrate the 87th anniversary of its birth, the Air-warriors of IAF are getting ready for the ceremonial parade as part of celebrations at Air Force Station Hindan. Come & witness the grand Parade. Two days to GO!!!" the IAF tweeted on its official handle.

The flypast over Hindon Air Base will include vintage aircraft, modern transport planes and frontline fighter aircraft, the IAF said.

#WATCH Hindon Air Base(Ghaziabad): Sukhoi 30MKI aircraft carry out vertical Charlie maneuver as an aerial salute to the Chief of Air Staff during full dress rehearsal ahead of #AirForceDaypic.twitter.com/BkbbqmaS0x

"The ceremony will conclude with a "scintillating aerobatic display" by Surya Kiran Aerobatic Team (SKAT) and Sarang Helicopter Display team, the IAF tweeted.

"The air display will commence with flag bearing skydivers of renowned AKASH GANGA Team jumping from AN-32 aircraft in their colourful canopies, at 0800 hours," it said.

The flypast would include the vintage aircraft, modern transport aircraft and frontline fighter aircraft of IAF. The ceremony will conclude with a scintillating aerobatic display by Surya Kiran Aerobatic Team (SKAT) & Sarang Helicopter Display team. pic.twitter.com/pmHsyBqhxH

In two years from now, the Sukhoi-30MKI fighters may be re-armed with Israeli Derby air-to-air missiles.

The IAF is looking at the I-Derby variant of the Israeli missile which was unveiled at the Paris Air Show in 2015. Integrating the missile into the Russian fighter will be a challenge and, according to sources, will require Israeli expertise, particularly in developing a data-link between the Sukhoi-30 and the missile, once it is fired.

A fighter jet communicates with the missile through the data link and passes on updated vectors (location) of the fighter which has been targeted.