Watch: Sharon Stone Gasps, Says "Oh My God" As Shah Rukh Sits Next To Her

When Shah Rukh Khan is introduced to the crowd in the video, Sharon first gasps before saying, "Oh, my God!" 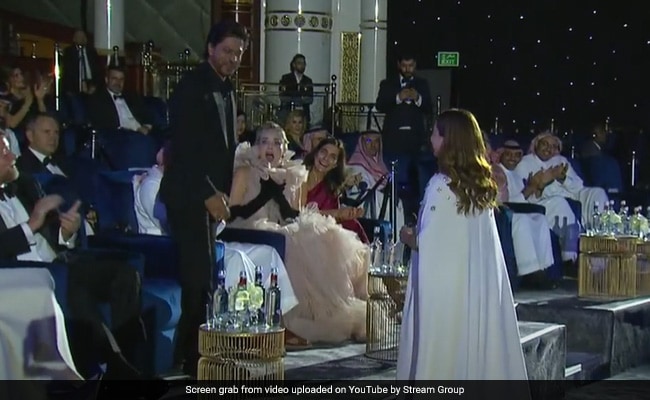 Shah Rukh Khan has accomplished everything a movie star could possibly hope for, from box office success to enormous popularity. But he still keeps on, one by one, putting additional feathers in his cap. Shahrukh Khan recently attended the Red Sea International Film Festival's second iteration in Jeddah, Saudi Arabia. Along with other actors and celebrities from around the world, the actor was present at the event. Priyanka Chopra, Kajol, and AR Rahman were also present there.

Shahrukh Khan and American actress Sharon Stone were seated next to each other during the event, although the lighting on the audience side was dim because of the stage performance. The anchor finally introduced Shah Rukh to the audience after a while. When Shah Rukh Khan is introduced to the crowd in the video, Sharon first gasps before saying, "Oh my God!" She has black gloves on her hands and is dressed in a beige dress. She clutched her chest as he sat down on a chair. Shah Rukh leaned in to say hello while observing her response. The video footage captured them exchanging "Namaste" as well.

My favourite part of today's event, Sharon Stone's reaction when she realised Shah Rukh Khan is sitting next to her.. We can't blame her, can we?#ShahRukhKhan#RedSeaIFF22pic.twitter.com/9avyz9OItc

Here is a link to the entire event:

Shah Rukh Khan was also honoured during the ceremony, and he spoke to the audience in Arabic as he took his award. He began by expressing regret that the speech would be so lengthy. He jokingly remarked that I am thrilled since this is the first time I have been recognised and taken seriously at a film festival.

His language abilities impressed many of his followers on social media and in the Arab world.