Watch: PM Shares Video Of Rousing Welcome In Germany Ahead Of G7 Summit 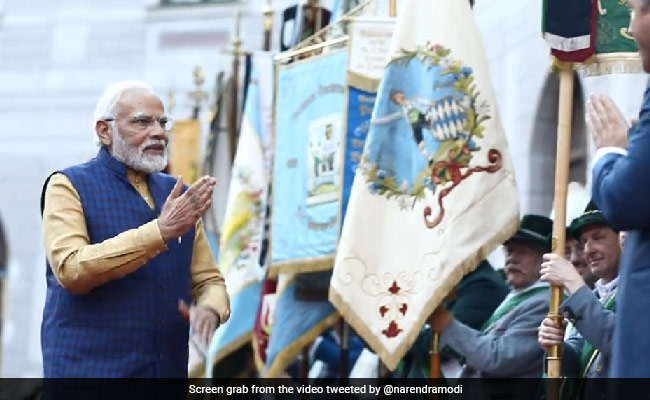 PM Modi will hold bilateral meetings with some leaders at the G7 Summit.

Prime Minister Narendra Modi on Monday shared an exhilarating video of how warmly he was welcomed in Germany.

PM Modi arrived in Munich on Sunday to attend the G7 summit where he will hold meetings with G7 and partner countries and will hold discussions on issues ranging from environment, energy, to counter-terrorism.

On the sidelines of the Summit, PM Modi will hold bilateral meetings with leaders of some of the participating countries.

"I will be attending the G-7 Summit today in which we will discuss various important global issues. Here's a video taking you through highlights from yesterday including a special Bavarian welcome and a vibrant community programme," tweeted PM Modi.

I will be attending the G-7 Summit today in which we will discuss various important global issues.

Here's a video taking you through highlights from yesterday including a special Bavarian welcome and a vibrant community programme. pic.twitter.com/oIhdr9hLyu

He was welcomed by a Bavarian band on his arrival in Munich.

It was one of the largest gatherings of the Indian expats in Germany post-pandemic. Hundreds of performers participated in the event performing India's traditional dances. The Audi Dome was embellished with the 'Vande Matram' song.

The G7 Summit invitation is in keeping with the tradition of strong and close partnership and high-level political contacts between India and Germany.

People from the Indian community in Germany expressed happiness after Prime Minister Narendra Modi addressed the community at an event in Munich.

"Whatever the respect we are getting in a foreign country only because of PM Modi," one person said.

In his address to the Indian expats in Munich on Sunday, Prime Minister Narendra Modi underscored the country's achievements in a short span of time and said India is impatient to fulfil its dreams.

"Today's India has come out of the mentality of 'it happens, it runs like this'. Today India takes a pledge to have to do, have to do, and have to do on time," said the Prime Minister.

After attending the G7 Summit, the Prime Minister will be travelling to United Arab Emirates (UAE) while coming back to India on June 28, 2022, to pay his personal condolences on the passing away of Sheikh Khalifa bin Zayed Al Nahyan, the former UAE President and Abu Dhabi Ruler. He will also congratulate Sheikh Mohamed bin Zayed Al Nahyan on his election as the new President of UAE.

This will be PM Modi's first meeting with Sheikh Mohammed bin Zayed Al Nahyan since his election as the new President of the UAE and the Ruler of Abu Dhabi.