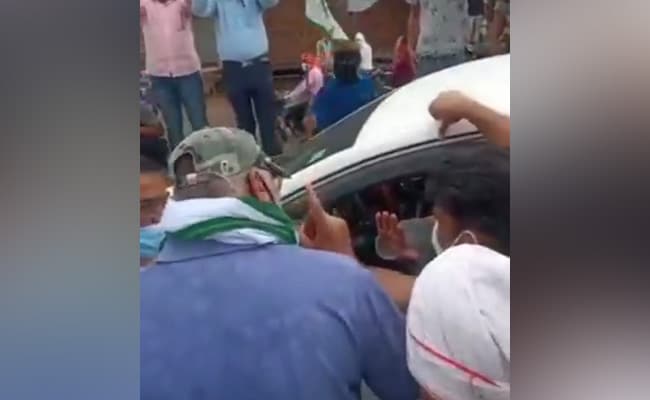 Union Agriculture Minister Narendra Singh Tomar's car was stopped today by a group of farmers protesting the centre's three farm laws, when he was going to inspect a government hospital in Madhya Pradesh's Sheopur district, part of his parliamentary constituency Morena.

Visuals showed angry farmers raising slogans against the minister as they blocked the road to stop his car. His security personnel rushed to clear the road but failed to keep the protesters from approaching the minister's vehicle.

A video clip recorded on a mobile camera showed a protester animatedly talking to Mr Tomar. He demanded that the agriculture laws should be scrapped and a legal guarantee for the minimum support price (MSP) regime must be provided.

"We have the right to stop you when the officers decline our requests to meet you," a protester said.

Mr Tomar's response was inaudible in the video clip.

Police detained over a dozen protesters.

"I'm always ready to meet and talk to farmers. Have already had 11 rounds of talks with them," Mr Tomar told reporters later.

Earlier this year, thousands of farmers - mainly from Punjab, Haryana and Uttar Pradesh - staged massive protests at three Delhi borders to demand for a repeal of the contentious laws and guaranteed MSP.

A large number of farmers are still protesting at the three sites - Singhu, Ghazipur, Tikri - braving the horrifying coronavirus surge.

Farmers fear that the laws will edge out the traditional crop markets and will create a monopoly of some corporate houses which will lead to their exploitation. They also claim that with the laws, the government wants to scrap the MSP system.

The centre says the laws will limit the role of middlemen and will help in enhancing farm incomes by providing more avenues for farmers to sell their crops. It has also promised that the MSP system will not be scrapped.

Several rounds of farmer-centre talks have not been able to break the deadlock.