The bridge on Mumbai-Bengaluru Highway (NH4) in the Chandani Chowk area of the city was demolished at 1 am on Sunday. 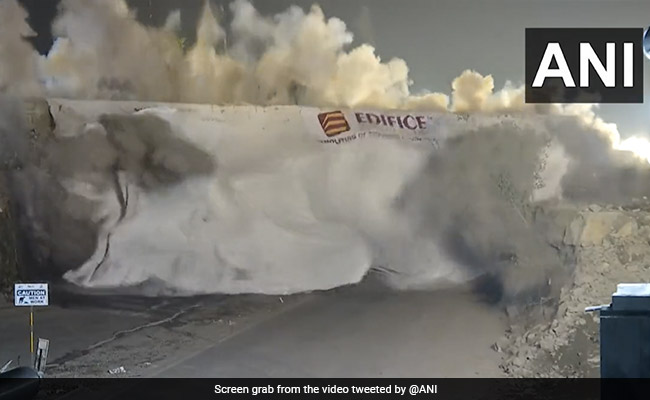 Around 600 kg of explosives were used to execute the blast. (Image credit: Twitter/ANI)

An old bridge constructed in the early 90s in the Chandani Chowk area in Pune was demolished through a controlled implosion in the early hours of Sunday, officials said.

The bridge on Mumbai-Bengaluru Highway (NH4) in the Chandani Chowk area of the city was demolished at 1 am on Sunday.

Following the demolition, several earthmover machines and trucks were pressed into action to bring down the hanging structures and lift away the debris.

#WATCH | Maharashtra: Rubble of demolished Pune's Chandni Chowk bridge laid bare along with a cloud of dust after the demolition

The razing of the bridge was part of an ambitious Chandni Chowk development project that is aimed at improving the traffic situation at the key junction. A multi-level flyover will come up at the junction and the work towards that effect is undergoing.

The planned demolition of the bridge generated a great deal of curiosity among the local people.

"The bridge was demolished at 1 am on Sunday through a controlled blast and everything was executed as per the plan. Now, we have pressed earthmover machines, forknails, and trucks to clear the debris from the spot," said Chirag Chheda, co-owner of Edifice Engineering.

A team of Edifice Engineering along with the NHAI authorities carried out the demolition of the bridge. This is the same company that demolished Noida's Supertech Twin Towers in the last week of August this year, officials said.

Vehicular movement in the area was stopped and diverted in view of the blast.

Asked that a portion of the bridge structure did not collapse completely, one of the lead engineers at Edifice said that due to the blast, the concrete has been removed and now only steel bars are there.

"Once the steel bars are removed using the machines, the remaining structure will also come down," he said.

He added that the quantity of steel used in the construction of the bridge was better than they had expected.

According to the district administration, sufficient manpower and machinery were pressed into action to demolish the bridge and clear the debris and the highway so that by Sunday morning, vehicular traffic can be resumed.

The vehicular traffic on Mumbai-Bengaluru Highway has been diverted in view of the planned demolition.

To restrict mass gatherings around the bridge, the police imposed section 144 in the area.

Around 600 kg of explosives were used to execute the controlled blast.