Pema Khandu described the ride as a "humble attempt towards promoting Arunachal as dream destination for biking and adventure sports". 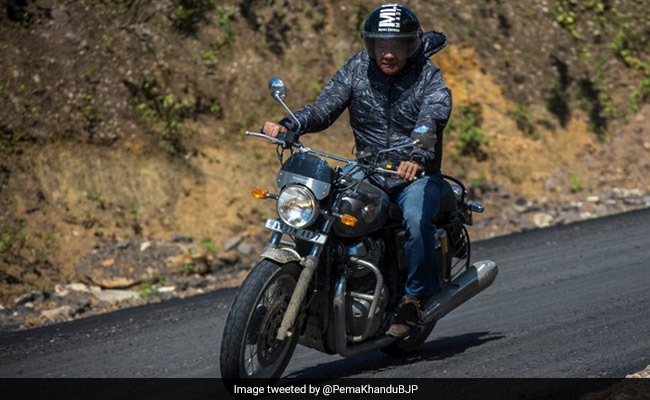 Lush green background, scenic landscape and a biker zooming through the hillside roads of Arunachal Pradesh.  The man seen riding is, however, no ordinary biker. He is Pema Khandu, the Chief Minister of Arunachal Pradesh. Mr Khandu, who posted the video of him riding the Royal Enfield Interceptor 650, said it was his "humble attempt" towards promoting tourism.

"Video of motorcycle road trip from Yinkiong to Pasighat," said the post by BJP's Pema Khandu who covered a 122 kilometers stretch along the headquarters of Upper Siang district in Arunachal, famous for its enriched landscape and serenity.

An attempt towards promoting #Arunachal as dream destination for #biking and #adventure sports! @YASMinistry@ArunachalTsm@tourismgoi@lonelyplanet_in@incredibleindia@KirenRijijupic.twitter.com/Om6ZxGPZNO

The chief minister described the ride as a "humble attempt towards promoting Arunachal as dream destination for biking and adventure sports".

The 122km route offers best road conditions and picturesque views. Now is the best time for bikers in Arunachal. #Arunachal#AmazingArunachal#VisitArunachal#Siangpic.twitter.com/gwksAdTNTa

This is not the first time Chief Minister Khandu was spotted on a bike. He has in the past ridden other Royal Enfield bikes and was also seen cycling along with Salman Khan last year. Mr Khandu uses his social media accounts extensively to promote tourism across Arunachal Pradesh with hashtags like #AmazingArunachal and #VisitArunachal.

The Pasighat stretch, 270 kilometers away from the capital Itanagar, is located along the banks of Siang River, the main tributary of river Brahmaputra. The area is popular for biking tours and other adventure sports.

The Royal Enfield Interceptor 650 is the Chennai-based motorcycle manufacturer's first attempt in recent times at a middleweight, 650cc parallel twin engine with a 270 degree firing order that puts out 47 BHP of power and 52 NM of torque.

The retro-style motorcycle was launched in November last year, along with its sibling, the Continental GT 650, and quickly became the highest selling middleweight motorcycle in the country. The 650 Twins from Royal Enfield, as they are called, have also been positively received by Western markets, mainly due to their disruptive pricing strategy and focus on simple motorcycling.