The Gujarati hymn, which was penned by 15th century poet Narsimha Mehta, was part of Mahatma Gandhi's daily prayers 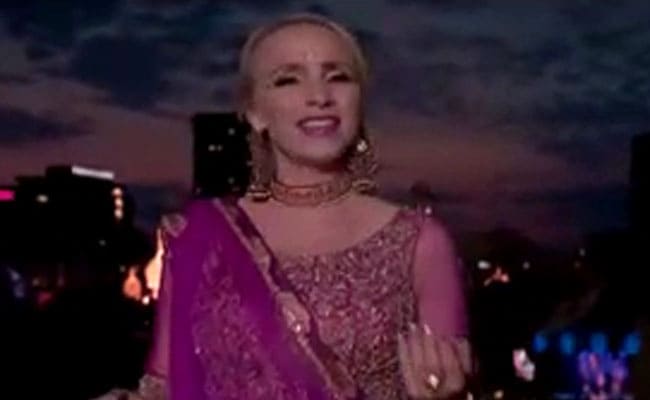 Anita Lerche from Denmark in the video presented by the Ministry of External Affairs.

As India celebrates the 149th birth anniversary of Mahatma Gandhi, musicians from over 124 countries have come together to pay homage to through his favourite bhajan 'Vaishnava Jan To Tene Kahiye'.

Prime Minister Narendra Modi today launched a medley version of the famous bhajan by artistes from over 40 countries during the closing ceremony of the Mahatma Gandhi International Sanitation Conference.

The Gujarati hymn, which was penned by 15th century poet Narsimha Mehta, was part of Mahatma Gandhi's daily prayers. It was also included in the roster of prayers sung at the Sabarmati ashram.

The bhajan, which was originally written in Gujarati, has been sung by many artistes over the years. It talks about equality, respect and support for others.

The All Indian Missions abroad commissioned a music group to record the bhajan in the run-up to Gandhi Jayanti. Artistes from Armenia to Angola, Sri Lanka to Serbia, Iraq to Iceland and several other nations collaborated to create videos which were then put together in a five-minute fusion video. All the countries recognised by the United Nations have contributed to the eclectic, colourful and culturally-rich video.

President Baron Divavesi Waqa of Nauru is among the star performers featured in the video.

The medley version and the contributions made by participant countries are available on the External Affairs Ministry's YouTube page.

Coronavirus Lockdown: Validity Of Driving Licenses That Expired On Feb 1 Extended Till June 30