During the summit, the delegates discussed possible ways to reduce violence against women and how to ensure that prisoners don't go back to crime. 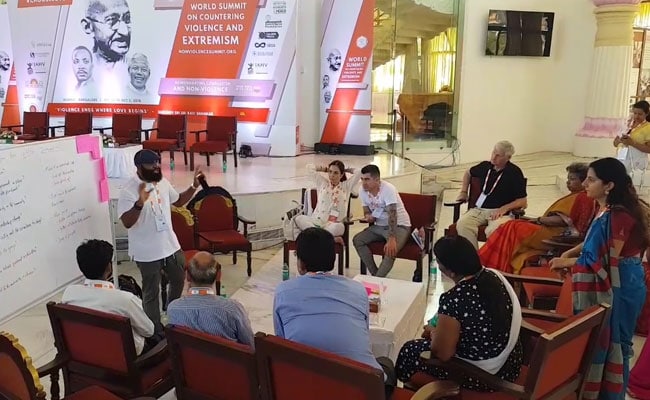 Police in India have their own challenges, with cops frequently accused of using excessive violence

A survivor of the 9/11 terror attacks, security officials from different countries and several  individuals who believe in a peaceful answer to violence and extremism, came together on Monday for a summit organised at the Art of Living in Bengaluru to celebrate the birth anniversary of Mahatma Gandhi. The Mahatma showed that violence can be countered through non-violence. However, how relevant is this message for law enforcers who deal with violent crime?

Frank Straub, a 9/11 survivor and an officer with over 30 years of experience in law enforcement in the United States of America (USA), believes that non-violence can be used to fight violence.

Mr Straub told NDTV, "I believe that if police personnel could meditate before they head out to work and then again after they finish their work, it would help. It may be met with skepticism, but it would work".

Reflecting on the summit, Mr Straub said, "We learnt about the types of non-physical violence. We went to a Jain temple where we were told about the violence of thought".

The police in India have their own challenges, with cops frequently being accused of using excessive violence. The most recent example of this is the killing of Apple sales executive Vivek Tiwari by a police constable in Lucknow last week.

Former Uttar Pradesh Director General of Police Prakash Singh, who was also present at the summit, condemned the killing and said that such behavior was "trigger-happy".

Deepak Sridhar, an organiser of the event and Director Operations at From India With Love, said "We want to fight extremism with love. We have had lukewarm peace initiatives for too long".

During the summit, the delegates discussed topics such as the possible ways to reduce violence against women and how to ensure that prisoners don't go back to crime.

"We have started working with prisoners - to give them economic help and provide them ways to stay away from crime," said Romila Sen, Director of the International Association for Human Values.

"Fighting violence with non-violence - this idea put forward by Mahatma Gandhi was discussed at the two-day summit. In the violent times in which we live, it is certainly an idea whose time has come," she said.