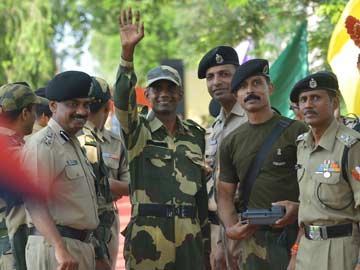 Wagah: After spending 48 hours in Pakistan's custody, a Border Security Force jawan returned home this evening. "I was treated well," said 30-year-old Satyasheel Yadav, who was swept onto the Pakistan side of the border in Jammu after he fell into the River Chenab on Wednesday. (After Falling Into River, BSF Jawan is in Pakistan's Custody)

"They made me comfortable. I was given food. I have no complaints. I am very happy I am going home," he said in a brief statement, hours before he was released by Pakistani troops.

Mr Yadav walked back across the border at RS Pura in the Jammu region, dressed in his combat fatigues and flanked by his seniors.

"I am grateful to them for treating him well," said DK Pathak, Director General of the BSF after the trooper returned. "I can't answer why they took so long to hand him over. They did ask some questions, it isn't uncommon," he added, responding to reports that the jawan had been questioned by Pakistan's powerful spy agency Inter-Services Intelligence.

Earlier, Mr Yadav detailed how the boat that he was patrolling the river in capsized on Wednesday.

Promoted
Listen to the latest songs, only on JioSaavn.com
"The Pakistani post was close by. I jumped out of the boat with a life jacket on and tried to swim, but couldn't. The Pakistani Rangers took me out, asked me who I was. I told them my name and that I am from the 33rd battalion," he said.

Pakistan also returned the boat, along with a couple of bulletproof vests in it.