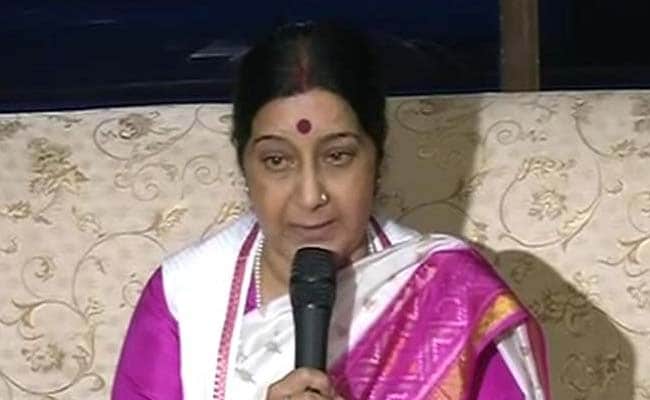 Kathmandu: India today did not rule out a possible meeting between Prime Minister Narendra Modi and his Pakistani counterpart Nawaz Sharif in Nepal on the margins of the South Asian Association for Regional Cooperation or SAARC Summit, with the External Affairs Minister saying "wait till tomorrow".

Ms Swaraj, who arrived in Kathmandu today to attend the 18th SAARC Summit, said she was happy to be in Nepal in just three-and-a-half months after her first bilateral visit to the country in July.

When asked about a possible meeting between Prime Minister Modi and Mr Sharif, Ms Swaraj said, "Wait till tomorrow."

Replying to a question on bilateral meetings on the sidelines of the SAARC meet, Mr Sharif's Adviser on Foreign Affairs and National Security Sartaj Aziz said, "Well, I think one or two are fixed. The rest are not yet fixed."

On the possibility of a meeting between PM Modi and Mr Sharif, he said, "No plans yet."

When pressed further, Mr Aziz said, "If the initiative (for the meeting) comes from the other side."

On a possible meeting with Ms Swaraj, Mr Aziz said, "Well if she requests, I will."

Asked whether the summit will be overshadowed by the India-Pakistan relationship, Mr Aziz said, "I hope not. The SAARC is more important."

The statements by Ms Swaraj and Mr Aziz came as the Pakistani media reported that the two premiers may interact on the sidelines of the two-day Summit from Wednesday.

"The two prime ministers will come face-to-face at the retreat ceremony in Kathmandu," a Pakistani official was quoted as saying by Express Tribune.

As part of a tradition, the heads of states and governments attending the SAARC Summit are taken for a retreat after the inauguration of the conference in order to create a conducive environment for bilateral meetings, the report said.

In New Delhi, External Affairs Ministry spokesperson Syed Akbaruddin remained non-committal, saying, "The Prime Minister's intention is to have meaningful dialogue with as many of our South Asian colleagues as possible. This would mean taking into account all aspects of our relationship."

Mr Akbaruddin said that it was a "work in progress" in terms of scheduling, other leaders' priorities and India's intent on having meaningful dialogue.

In Islamabad, a senior foreign ministry official said that Pakistan had not yet received any request for such a meeting from the Indian side.

Promoted
Listen to the latest songs, only on JioSaavn.com
Mr Sharif had attended PM Modi's swearing-in ceremony in May and held bilateral talks.