VS Naipaul slammed by Girish Karnad for his views on Muslims 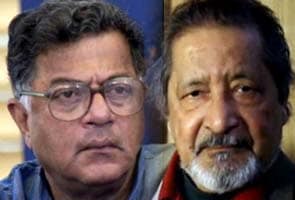 Mumbai: VS Naipaul has come in for stinging criticism from noted playwright Girish Karnad for his views on Muslims in India, with the latter saying the Nobel laureate has no idea of the community's contribution to the country's history.

"Naipaul has no idea of how Muslims contributed to Indian history," Mr Karnad said during a session on theatre, at the "Literature Live!" literature festival in Mumbai yesterday where he attacked the Indian-origin writer for his reported visit to the BJP office after the Babri mosque demolition.

Dwelling on Mr Naipaul's anti-Islam stance in his writing, Mr Karnad said, "Given that music defines our daily existence... you find it in the streets, in the restaurants and so on... you would expect an exploration of India to comment on that... Now Mr Naipaul has written three books on India. If you read them, you find that not even one of them contains any reference to music. He has gone through the whole of India without responding to Indian music. I think that only means that he is tone deaf," Mr Karnad said.

Mr Naipaul, who was awarded the Lifetime Achievement Award at the festival, was not present when Mr Karnad made the remarks before a small audience which included actor Naseeruddin Shah.

Calling Mr Naipaul an unreliable writer of non-fiction as far as India is concerned, Mr Karnad said, "He really doesn't pay much attention to the details of the texts he studies."

Meanwhile, reacting to Mr Karnad's remarks, festival director Anil Dharker today said, "We were all taken aback by Girish Karnad's attack on V S Naipaul. After all, we had invited him (Karnad) to speak about his journey in theatre, and Mr Naipaul had nothing to do with that! Even the packed audience had come to listen to Mr Karnad talk about theatre... I am all for free speech but free speech presupposes a dialogue, not a diatribe. Mr Karnad's two objections to Mr Naipaul getting the award are demonstrably false," Mr Dharker said in a statement.

"Naipaul is of Indian origin, so we are not rewarding a foreigner. As for Naipaul being anti-Muslim, his wife Nadira is Muslim and her two children are being bought up as Muslim," the statement added.

Promoted
Listen to the latest songs, only on JioSaavn.com
"Naipaul writes about how Muslim rulers and invaders of the past destroyed temples, monuments and so on. That's historical facts, and who can argue against that? That does not make Naipaul anti-Muslim," Mr Dharker said in the statement.

"I also resent the implication that we, as organisers, are somehow not secular. I am a Trustee of Citizens for Justice and Peace (CJP) led by Teesta Setalvad, and we have been fighting over 200 cases in court against (Narendra) Modi and his government over the 2002 Gujarat violence," Mr Dharker added.