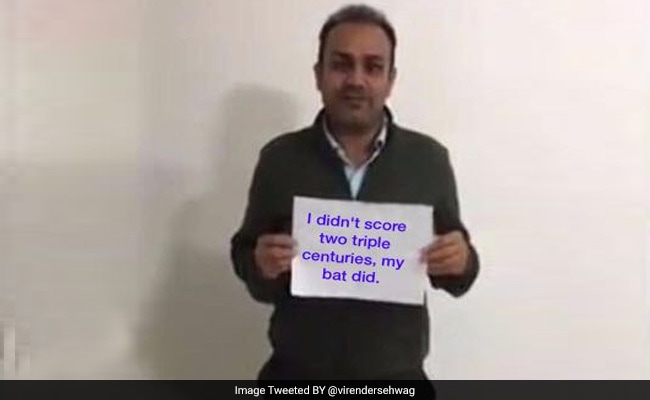 Former cricketer Virender Sehwag, currently the darling of Twitter with nearly nine million followers, faced anger today after a tweet that appeared to mock a post by a Kargil martyr's daughter, Gurmehar Kaur. She is currently in the news over her social media campaign against the BJP-linked student group Akhil Bharatiya Vidyarthi Parishad, or ABVP. In a tearful voice, Ms Kaur told NDTV's We The People on Sunday that she had been threatened with rape following her post.

Late on Sunday night, Mr Sehwag tweeted a picture of himself holding up a piece of paper with these words on it: "I didn't score two triple centuries, my bat did."

The former cricketer's comment has been re-tweeted over 17,000 times in less than 24 hours. People were quick to pick up his sly reference to Ms Kaur's post in May urging peace between India and Pakistan.

Mr Sehwag's tweet drew sharp reactions, both critical and supportive. Bollywood actor Randeep Hooda ended up taking some of the flak with his tweets.

@ShekharGupta@virendersehwag 3)it was just very witty of Viru to come with "Bat mein Dum".Cant u see the irony? Defuse the situation nt add

@virendersehwag by having a team tht thinks this is funny and then showcasing it , the jokes on u mister , pick on sum1 ur own age and size

@RandeepHooda@virendersehwag u both just lost a fan. if u cnt support her effort to erase the deeprooted hatred thn dnt mock her atleast.

Ms Kaur is the daughter of Kargil martyr Captain Mandeep Singh. Last week, she posted a strong message on Facebook after clashes over Ramjas College inviting Jawaharlal Nehru University student Umer Khalid to an event. The invite was cancelled after violence allegedly by ABVP activists, who called the college "anti-national."

Ms Kaur, tagged in most of the tweets, responded to Mr Hooda, which led to this exchange:

@mehartweets Pls don't credit me with so much.Your peace video was good bt now it's political not humanitarian.That's the problem2 begin wth

Who's polluting this young girl's mind? A strong Arm Force prevents a war. India never attacked anyone but a weak India was always invaded. https://t.co/gXHkAGi9sh

Freedom of expression is not a licence to shout anti-national slogans in campuses. Criticise the govt but don't abuse the motherland. https://t.co/3iqyqeLdJe

Last year, Ms Kaur featured in a viral video in which she held up placards urging peace between India and Pakistan. One of them read: "Pakistan did not kill my dad, war killed him."

Ms Kaur was heavily trolled for that video, which has been viewed over 1.5 million times on Facebook alone. This time, she has chosen to file a complaint with the Delhi Commission for Women over the threats.