A video of 2000 people, at a gathering for the engagement ceremony of former Gujarat minister Kantibhai Gamit's grand-daughter, has gone viral. Kantibhai Gamit apologised for it. 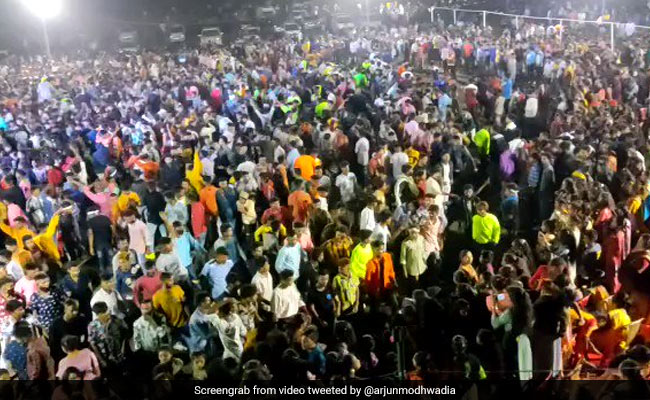 The Gujarat Police claimed they have initiated action against the organisers

Hundreds of people attended the recent engagement ceremony of the granddaughter of a Gujarat BJP leader violating several anti-coronavirus rules imposed by the Centre and the state government. Visuals showed scores of young men and women grooving to dance-music blared from massive speakers at an open ground, without caring for the social distancing norms put in place to check the spread of the virus. 18 people, including the leader, have been arrested.

"Kantibhai Gamit, a former BJP MLA, his son Jitendra Gamit and 16 others were arrested for organising a mega event and thereby putting the lives of others at risk amid the pandemic," Inspector General of Surat-Tapi range, S Pandia Rajkumar, was quoted as saying by news agency PTI.

Mr Gamit, a former minister, invited 2,000 people to his granddaughter's engagement function in Tapi district, violating a state government rule that allows no more than 200 people in social events.

"I apologise as it was a mistake. We had organised Tulsi Vivah (a Hindu festival) and my granddaughter's engagement ceremony together but didn't invite anyone personally. We had prepared food for 2,000 people and also organised the dance. Someone made the video and it went viral," he was quoted as saying by news agency ANI.

Gujarat has so far reported over 2,11,000 coronavirus cases including around 4,000 deaths.

The Gujarat High Court on Wednesday ordered the state government to come up with a directive notifying that those caught without masks will have to do community service at COVID-19 treatment facilities as punishment.