Referring to statements made by analysts that modern aircraft carriers were a liability, Commodore Vidhyadhar Harke, who will command India's new carrier, Vikrant, has said that these were "a misplaced notion or statement". 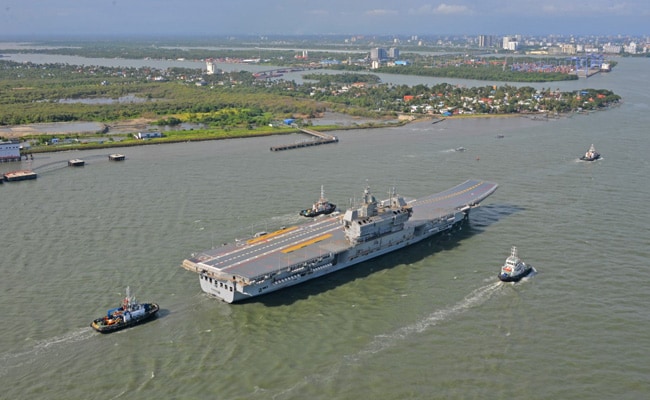 India needs at least three operational aircraft carriers to maintain its presence across its areas of maritime interest, underlined the Indian Navy amid claims that these carriers were a "liability".

Referring to statements made by analysts that modern aircraft carriers were a liability, Commodore Vidhyadhar Harke, who will command India's new carrier, Vikrant, has said that these were "a misplaced notion or statement".

In an online piece last week, security analyst Bharat Karnad had referred to the "extreme vulnerability" of aircraft carriers such as Vikrant "to supersonic and, soon hypersonic, anti-ship cruise missiles that will be in the employ of all potential adversary navies".

The argument is premised on the view that there are no defensive systems presently available that can intercept an incoming hypersonic missile. Commodore Harke has disagreed.

There is no operational platform out at sea which performs an area-domination mission quite as well as an aircraft carrier, he reasoned.

"The carrier provides reach to ward off any surface, sub-surface or air threat. The closing ships [ships that are part of a carrier battle group] would be operating in tandem with the carrier. So it's not a liability," he said.

In other words, a cohesive Indian aircraft carrier battle group is meant to prevent the launch of enemy anti-ship missiles which threaten ships in the fleet.

Questions have also been raised on the costs of India building and operating aircraft carriers.

The Vikrant, which has successfully completed its first sea trial, is reported to have cost Rs 23,000 crore so far. For decades, the Indian Navy has argued that it needs three aircraft carriers two which will defend either seaboard with one carrier held in reserve. This has not found favour with the government which has put the Navy's plans for a third carrier on the back-burner, focusing instead on the indigenous construction of a class of six nuclear powered attack submarines.

The Navy has not given up hopes and points out that an eco-system has been built in the country to support the construction of this class of warship, one that generates jobs for thousands.

"I don't call it a cost, I call it an investment that is being done [which] is being ploughed back into our industries, public and private sectors,'' said Vice Admiral Anil Chawla, the Commander in Chief of the Southern Naval Command.

The construction of Vikrant at the Cochin Shipyard, he said, "has supported the employment of over 40,000 Indians over the past few years. Even today 2000 workers a day work on this." What's more, the technology base which has been created, "produces technology which can then be used for other applications and in turn enhances our indigenous capabilities as well."

Under development for more than a decade, India's first indigenous aircraft carrier, Vikrant, is designed to operate for fifty years. At 45,000 tonnes (fully loaded), she is the largest and most complex warship ever built in the country and has a crew of more than 1,700 officers and sailors.

Several key components, including its Israeli built Multi-Function Surveillance, Track And Guidance Radar (MF-STAR) and its complement of Barak-8 surface to air missiles are yet to be installed.

Russian engineers working at the Kochi Shipyard are presently involved in installing the ship's aviation complex which will allow it to operate its complement of MiG-29K fighter jets.