JNU University: A mob of around 70 to 100 people attacked students and faculty last week

A Congress fact-finding committee that inquired into the mob violence at JNU on January 5 has singled out Vice Chancellor Jagadeesh M Kumar as the "mastermind" behind the attack and called for his immediate dismissal. The party has also demanded a "criminal investigation" against Mr Kumar and others for "conspiring with the attackers to unleash the violence" and that Delhi Police be held accountable for their conduct during the attack.

In a detailed document released this afternoon, which also accused Delhi Police of allowing attackers to move freely around the campus, the party alleged the Vice Chancellor's actions "point to connivance and complicity with the attackers" and said he had "meticulously infiltrated the university with people... compliant to him and had... inclination to right wing ideology".

The Congress's report has suggested that lapses in campus security - that allowed weapon-wielding goons to enter and carry out the violence - were "pre-meditated, pre-planned... targeted violence to intimidate fear in students and faculty".

The report pointed to discrepancies between the university's official statement on the violence and that released by the cops; according to the report JNU officials called the cops at about 4.30 pm, but the cops said there were only allowed to enter at about 7.45 pm.

In their first official statement Delhi Police also said the violence took place at a spot far away from where their personnel had been stationed. 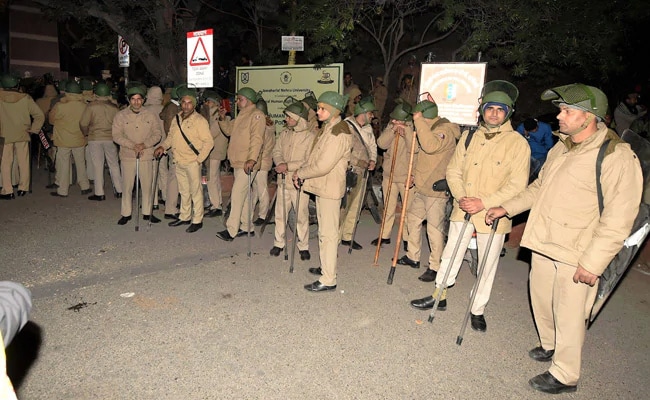 JNU University: Cops have been accused of inaction during the mob attack by some students

The Congress's claim echoed that made by a student - Saket Moon, a students' union official - who told NDTV: "police had been in campus since afternoon, but did nothing".

Delhi Police, who also been criticised for their conduct during the attack, have filed multiple FIRs so far, but only one of these is linked to the violence on the evening of January 5 and no arrests have been made, so far, in that case.

The other FIRs - filed in quick succession around the time the attack was taking place - name student union leader Aishe Ghosh and several others in connection with the alleged vandalism and violence at the university's computer server room - an attack the JNU administration says is the fallout of protests over hostel fee hikes.

Ms Ghosh, who suffered a head injury in the attack, has firmly denied any involvement - either hers or those of JNUSU officials - in the incident at the server room. Nine students, including Ms Ghosh, will be questioned from Monday over the server room violence.

The Congress report, however, cast suspicion over the server room episode itself. It said it "reeks of mala fides" and pointed to a statement issued by the Vice Chancellor that said the server room was functioning on January 4, the day it was allegedly vandalised.

The university has indicated that the mob attack, which took place hours after the alleged server room clashes, was in response to some students stopping others from registering for the winter semester.

"It is almost as if the Vice Chancellor took advantage of the disconnection of the server to prevent a recording of CCTV footage to protect the attackers and (let them) go about their business without any record," the report claimed.

JNU University: The worst violence is believed to have erupted at Sabarmati hostel

The Congress also questioned the disconnection of street lamps during the attack, something which those who were attacked have alleged was a deliberate ploy to offer their assailants cover to perpetrate the violence and safely leave.

Since the attack - in which 70 to 100 masked goons, carrying iron rods and sledgehammers - barged onto the campus and went on an unchecked three-hour rampage that left 34 injured - the Vice Chancellor been criticised for his apparent inaction.

Mr Kumar's resignation has been demanded by sections of students and faculty, as well as veteran BJP leader Murli Manohar Joshi, but the government has so far refused to comply.