DMK chief M Karunanidhi, a five-time Chief Minister of Tamil Nadu, was recovering from a long illness when he contracted the infection and developed a fever.

DMK patriarch M Karunanidhi was admitted in hospital on Friday.

Thousands of supporters gathered outside Chennai's Kauvery hospital on Sunday evening as ailing DMK chief M Karunanidhi's condition took a turn for the worse. The veteran leader's family, too, had reached the hospital and Chief Minister E Palaniswami cut short his tour to Salem and headed for Chennai. In a late night statement, the hospital said his health stabilised. Calling it a "transient setback", the hospital said Mr Karunanidhi was improving.

But even after the statement from the hospital and appeals from party leaders, the supporters refused to disperse, leading the police to use mild force so the family and other DMK leaders could leave.

Close to midnight, Mr Karunanidhi's son and DMK chief MK Stalin appealed for calm. Assuring the supporters that the Mr Karunanidhi was stable, he asked them to cooperate with the police and not inconvenience the public. But few complied.

The DMK patriarch, who was admitted in hospital on Saturday, was better, his family had said yesterday. A statement from the hospital also confirmed that his blood pressure has stabilised.

In a photograph released by his party this morning, the 95-year-old was seen for the first time since his hospitalization on Friday. 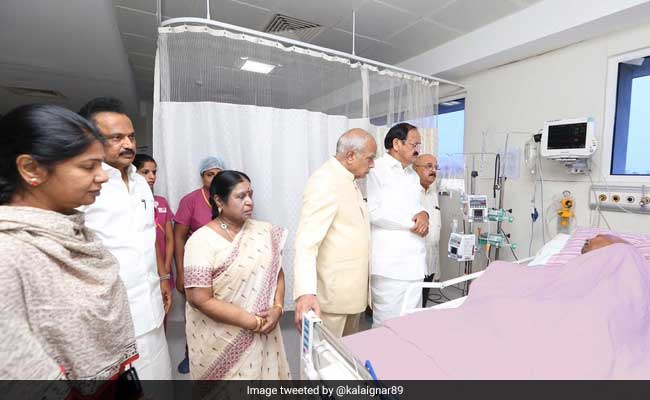 DMK's M Karunanidhi was visited by Vice President Venkaiah Naidu at the hospital on Sunday..

The 95-year-old, who is suffering from urinary tract infection, got a visit today from vice president Venkaiah Naidu. In the photograph with Mr Naidu, he appears to be sleeping. Trinamool Congress leader Derek O' Brien also met Mr Karunanidhi's son MK Stalin and daughter Kanimozhi at Kauvery Hospital to inquire about health of DMK chief.

A five-time Chief Minister of Tamil Nadu, Mr Karunanidhi was recovering from a long illness when he contracted the infection and developed a fever. For more than a year, he has not made any public appearance except occasional visits to his party office. He was admitted in hospital last on July 18 for a change of tracheostomy tube.

On Thursday evening, politicians across party lines made a beeline for his home after he fell ill. Among them were ruling party leaders like O Panneerselvam and fisheries minister D Jayakumar;

Thirumavalavan of  the VCK and former union minister GK Vasan, who broke away from the Congress to revive the Tamil Manila Congress two years ago.