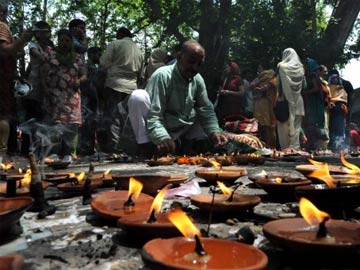 Chicago: In a shocking revelation, as many as 163 Indians, most of them brought to the US as teenagers from villages in northern India to be trained into Vedic Pandits by two institutions set up by Maharishi Mahesh Yogi of transcendental meditation fame, appear to have gone missing over the last 12 months.

Of the 1,050 young Indians brought to the Maharishi Vedic City and the Maharishi University of Management in Fairfield, Iowa, 163 - some of them just 19 years old - have gone missing in the last one year, Hi India, a Chicago-based weekly newspaper for the Indian community, reported in its latest issue.

Both the Vedic city and the university are owned by the late Maharishi Mahesh Yogi's family. According to the report, the management running these places did not even care to trace the missing people.

Even the Global Country of World Peace (GCWP), one of the many teaching centres set up by the India-born spiritual guru, does not know about the plight or flight of these Vedic scholars called 'world peace professionals'.

"They have jumped the fence for immigration purposes or for chasing their American Dream," the newspaper quoted the varsity bosses as saying.

The GCWP runs a Vedic Pandit programme claiming to "bring about peace on earth where there will be no war".

Under the project to recruit Maharishi Vedic Pandits, publicity literature is distributed in Indian villages, mostly in Hindi speaking areas, among people living under the poverty line.

Children are enrolled with the permission of their parents, who are promised that their wards would be given education up to 12th standard, after which they would be turned into Pandits or masters of the art of Hindu religious rites and services.

After some 10 to 15 years, the qualified Pandits are supposed to have a choice to either remain with the organisation and make a living, or leave the centre and work outside on their own.

Investigations by Hi India have found that the kids of the programme, enrolled at the tender age of five years, were rarely provided education beyond fifth standard. After investigation by the newspaper, it came to light that these Vedic Pandits were brought to the US from India and were kept in makeshift trailer homes to be guarded by round-the-clock guards.

When contacted, most officials of the Maharishi's Fairfield complex refused to comment. Only one of them suggested that these students might have "run away for immigration purposes".

According to one Pandit, before the visa application at the US embassy in India, a contract is prepared and signed by the organization and the concerned Pandit for rules, regulations and compensation. The Pandits are initially sent to the US for two years, and thereafter, either their visa is extended for six more months or they are sent back and recalled for two more years.

According to the report, a contract is drafted in English but the copy is neither given to Pandits nor is it translated or explained to the fifth-grader emigrants who do not even understand English. The contract states that they will be given $50 compensation while in the US and another $150 in India. This $150 is not given on a monthly basis to the families of the Pandits but, rather, is considered as bond money.

"If the Pandit 'behaves well', his so-called compensation for two years is given to him or his family on his return from the US. The contract is prepared in a way to obtain visa," the report said.

According to the newspaper, if the management of the Vedic City finds out that some Pandits are desperate to leave the US, a mock travel plan is chalked out and the Pandits are taken in a van to Chicago's O'Hare airport and dropped at the entry gate. After asking them to wait till the aircraft arrives while the van driver goes around and comes back in a short while.

According to one Pandit who was about to flee, "some of the strong-willed Pandits run away from the airport for better prospects and the rest of them are picked up by the driver and taken back to the Vedic City".

According to sources in the Indian consulate in Chicago, in a situation where an Indian passport holder is considered or presumed gone missing and his passport is left behind, it has to be returned immediately to the nearest Indian mission which has to also be informed about the circumstances in which the Indian citizen went missing.

Promoted
Listen to the latest songs, only on JioSaavn.com
The Chicago consulate, however, says the GCWP has never returned or deposited any passport and neither has it shared any missing person information. According the sheriff's department and police department of Fairfield, Iowa, no missing person report has ever been filed by the GCWP.