The overall expenses for the first phase of the yatra listed in the affidavit amount to around Rs 1.8 crore. 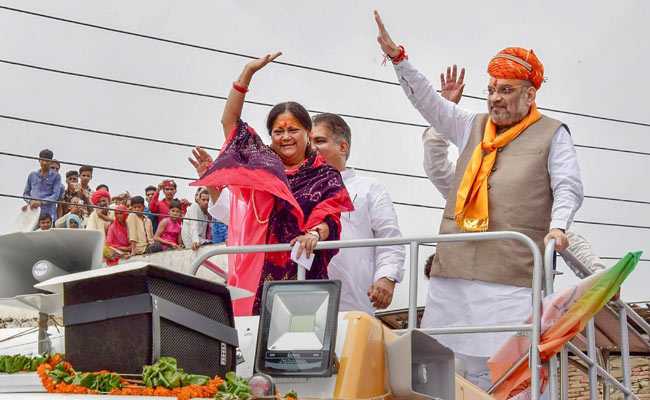 In its affidavit submitted in the Rajasthan High Court, the ruling BJP said that the party spent more than Rs 20 lakh on the cutouts of Chief Minister Vasundhara Raje during the first phase of the ongoing Gaurav Yatra. BJP president Amit Shah's cutouts cost just Rs 30,000, the affidavit said.

The overall expenses for the first phase of the yatra listed in the affidavit, a copy of which is with the IANS, amount to around Rs 1.8 crore.

The total cost of tent houses, including various services amounted to Rs 41.30 lakh. The CM's rath-branding came for over Rs 1.75 lakh. The cost for her big cut-outs is 13.38 lakh and for smaller ones, Rs 5.78 lakh.

Ms Raje is on a statewide yatra which was kicked off by BJP chief Amit Shah on August 4. The first phase of the yatra, an 886km stretch, has covered the Udaipur zone (Udaipur rural, Dungarpur, Chittorgarh, Pratapgarh and Banswara).

State Congress vice president Archana Sharma alleged that the estimates seemed on the lower side. "If they show a higher amount, they will be questioned about the source of income," she said.

On BJP President Amit Shah's cut-outs, which cost just Rs 30,000, state BJP chief Madanlal Saini said he was unaware about the expenditure. The party's publicity head Ashok Parnami did not respond to a query.

The affidavit also mentions that the accounts will be settled after the yatra is over.

A PIL was filed by Vibhuti Bhushan Sharma on August 10 questioning the use of government machinery in the Rajasthan Gaurav Yatra being taken out under the leadership of Chief Minister Vasundhara Raje.

The court asked the BJP to come out with an affidavit on expenses following which the party on Tuesday presented an affidavit in the High Court with details of expenditure made during the yatra.

The court has fixed Aug 25 as the next date of hearing.