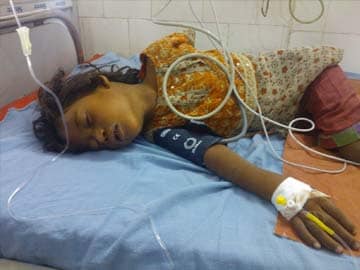 Patna: Union Health Minister Harsh Vardhan on Sunday launched a two-day vaccination campaign in Bihar's Muzaffarpur district hit by a suspected encephalitis outbreak that has claimed the lives of at least 139 children so far.

"The campaign has been launched to ensure 100 percent immunization of children in the affected areas," Harsh Vardhan told media persons after the campaign began at a primary health centre in Kanti block of Muzaffarpur, about 70 km from here.

He said all children should be vaccinated as it is the best preventive measure against any disease.

"Immunization is a must for children for safeguarding them against all diseases, not only encephalitis," he said.

"I was informed by doctors and health officials here that 92 percent children in the affected districts have not been vaccinated. Our aim is to ensure 100 percent immunization of children," Harsh Vardhan said.

He said that after returning to Delhi Sunday night, he would formulate a comprehensive plan to eradicate the suspected Acute Encephalitis Syndrome (AES).

The union minister said that he has already discussed the disease and its possible causes with World Health Organisation (WHO) officials and scientists from various institutes but they were not sure whether it was viral, toxic or metabolic.

"There is a need of in depth research on the cause of deaths due to the disease," he said.

Harsh Vardhan reiterated that the central government would provide all possible help to Bihar in controlling the outbreak.

A virology centre would be set up in Bihar on the lines of the National Institute of Virology in Pune, he said.

The disease, limited to Muzaffarpur till last week, has now spread to Vaishali, Samastipur, Sheohar, East Champaran, Sitamarhi, Begusarai, Bhagalpur and Gaya districts of the state.

The Acute Encephalitis Syndrome is a severe case of encephalitis characterised by inflammation of the brain. The infection - transmitted by mosquitoes - causes high fever.