Twenty-eight of the deaths were in Nainital district alone. 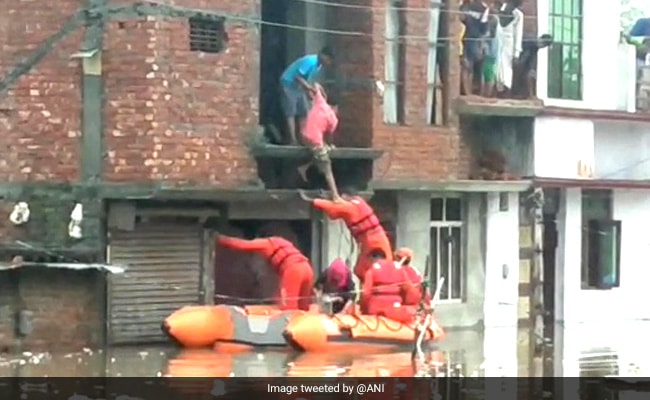 Landslides blocked roads, many villages went without electricity and the number of people dead climbed to 52 as authorities on Wednesday faced the aftermath of the rains that had battered Uttarakhand for over two days.

Six more bodies were pulled out from the rubble of collapsed houses. Five people are still missing and 17 injured, according to official data.

The weather cleared on Wednesday morning after the incessant rains since Sunday night that had triggered floods which washed away bridges and landslides which blocked access to towns like Nainital for hours.

"I have suffered a loss of Rs 40-50 lakhs. A portion of my house is completely damaged. The tank that I built for fish farming is also damaged," says a local. pic.twitter.com/XeBb7ULyxI

The official count of people missing due to rain-related incidents does not include a trekking team of 11 people that left Uttarkashi but had not reached its destination Chitkul in neighbouring Himachal Pradesh.

Also missing are three porters accompanying an ITBP patrol near the India-China border.

The National Disaster Response Force (NDRF) said it has rescued hundreds from the flood-affected areas of Uttarakhand. The federal force has deployed 17 rescue teams in the state.

"So far, NDRF rescuers have evacuated more than 1,300 stranded people from Udham Singh Nagar and Nanital. They are also distributing relief material in flood-affected areas of Uttarakhand," a spokesperson said.

Six NDRF teams are deployed in Udham Singh Nagar, two teams each are stationed in Uttarkashi, Chamoli and one each in Dehradun, Champawat, Pithoragarh and Haridwar.

"Standing crops have been damaged extensively, water has gushed into homes. I am moving from door to door in the affected areas," he told reporters. His constituency Khatima is a part of the district.

The CM travelled by road as his helicopter could not take off from Haldwani due to a technical problem, he tweeted.

Union Home Minister Amit Shah was expected to arrive in Dehradun late Wednesday night, and may undertake an aerial survey of the affected areas on Thursday morning, officials said.

Tourist town Nainital was returning back to normalcy on Wednesdsay.

A furious Gaula river has damaged the tracks at Kathgodam railway station in Nainital, which experienced a record 445 mm rainfall on Tuesday.

The damaged tracks in Kathgodam could take four or five days to be repaired, DGP Ashok Kumar told PTI.

In Nainital, tourists woke up to a bright morning without a trace of rain and were out on the streets for shopping and sightseeing. Taxis had begun running through the town.

"It was suffocating to be locked up inside our hotel rooms due to the incessant rains on Tuesday," a young tourist from Uttar Pradesh said.

He added that the scenic beauty of the place had made up for what they suffered over the last two days.

At most places in Nainital, the water had receded from the streets. Taxis were running again.

Electricity supply and telephone connections, badly hit by the rains, have been restored in the townl. But villages on the outskirts remain affected, officials said.

The rescue and restoration work was likely to pick up with the improvement in the weather, Nainital District Magistrate Dhiraj Garbiyal said.

The Haldwani and Kaladhungi roads have been opened partially, restoring connectivity to Nainital which remained cut off on Monday and most of Tuesday.

The Haldwani-Nainital national highway is open for light vehicles only because of landslide-prone zones at some spots.

As the weather cleared across Uttarakhand on Wednesday, the authorities allowed stranded pilgrims to proceed towards the Chardham destinations of Kedarnath, Yamunotri and Gangotri.

But the national highway leading to Badrinath was still blocked by landslides at several points.