Uttarakhand Polls: On one side, PM Modi does the work of developing Char Dham, on the other hand, Congress workers give Rohingyas ration card and ID card, said Amit Shah. 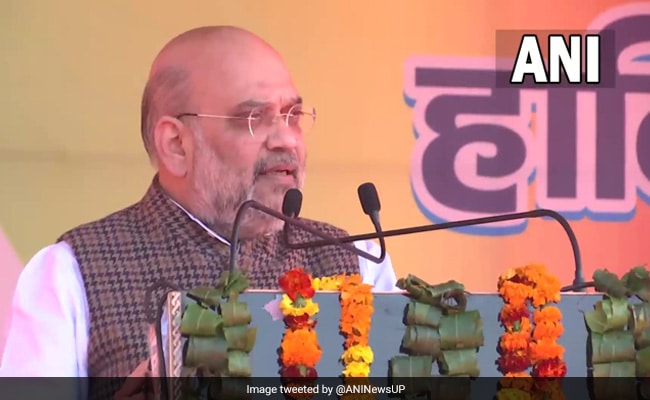 Union Home Minister Amit Shah on Saturday hit out at the Congress party and said they have started appeasement politics by helping Rohingya Muslims settle on the mountains of the state.

Addressing a public meeting in Sahaspur, Mr Shah said, "Harish Rawat has said that he would construct Muslim University in Uttarakhand. Is any religious activity done in the University?"

"Congress has started the politics of appeasement. Rohingya Muslims have begun to be seen on the mountains of Uttarakhand. It is being done under their leadership. I have come to promise you that if you make Dhami your Chief Minister, the BJP government would wipe Rohingya out of the state," said Mr Shah.

"On one side, PM Modi does the work of developing Char Dham in the state, on the other hand, the Congress workers go to the collectors and give the Rohingyas ration card and an ID card," Mr Shah added.

Slamming the Congress further, the Home Minister said that Priyanka Gandhi Vadra belongs to the fourth generation of her family and if each generation had done one developmental work of each Dham, the BJP would not have been left with anything to work on.

"Congress has given the slogan of 'Char Dham Char Kam'. I want to say to Priyanka Gandhi, you are the fourth generation of your family. If each generation had done one work of the Dham, we would not have been left to do developmental work. The reconstruction of Badri Dham was not done for 70 years. They did not construct the all-weather road to reach the Char Dham. You remember Char Dham today because you want votes today," he said.

Mr Shah further said that national security was also neglected during the Congress rule at the Centre; however, under the leadership of Prime Minister Narendra Modi, nobody has the courage to threaten our borders or our soldiers.

"During the Congress rule, national security was also neglected. Somebody asked the Defence Minister of Congress that migration is going on in the mountains, why don't you construct roads? He said that the enemy would enter the land if we construct roads. Today, there is the Narendra Modi government in the country, nobody has the courage to threaten our soldiers or our borders," Mr Shah said.